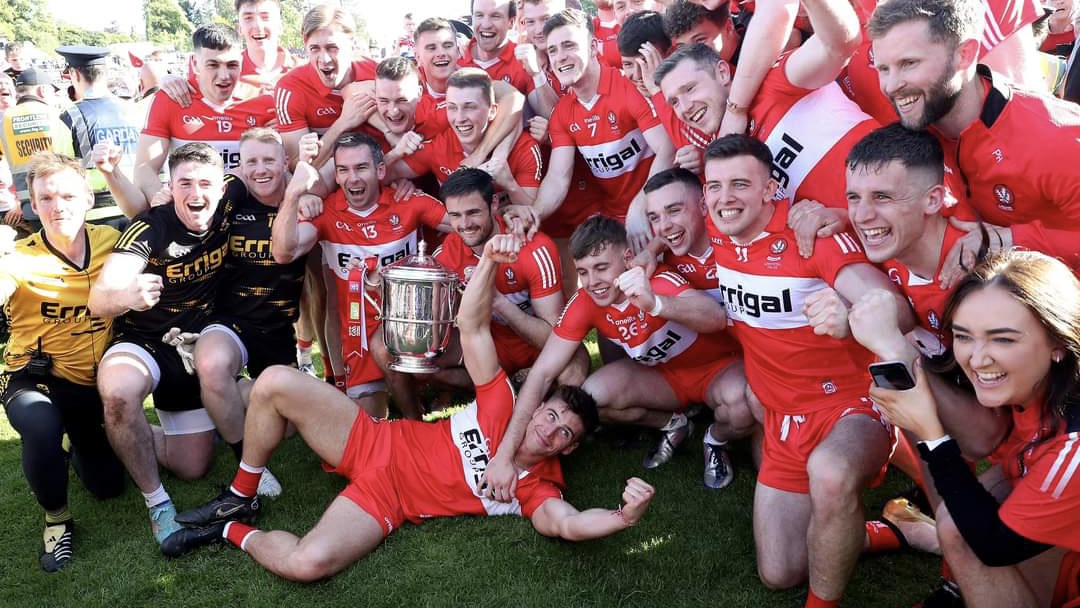 With wins over Tyrone and Monaghan on the way to the final, Derry faced another Division 1 team in Donegal in the decider. Leading at the break Donegal levelled matters within seconds of the resumption of the second half, before the sides traded scores until the end, with nothing separating them at the final whistle.

Derry dug deep however in extra time and late points from Brendan Rodgers and Connor Glass proved decisive as they withstood a last minute onslaught on their own goals to hold on and deservedly win.

Well done to the players, management team and all involved in getting to this point and claiming the silverware so many in the county have coveted for so long, over this season and the years before.

Thanks also to the thousands of Derry supporters who made their way to Clones on the day to create such a special atmosphere for the team and all involved; as well as creating such a great buzz around the county over the last few weeks.

Derry now progress to the All-Ireland Quarter-Finals along with the other provincial winners Galway, Kerry and Dublin; where they await an opponent from the qualifiers. The Quarter-Finals are scheduled for the weekend of the 25th/26th June.

Below report from GAA.ie – By Declan Bogue at St Tiernach’s Park, Clones

Derry won their first Ulster title since 1998 on a day of days for the county in Clones, by sealing the first ever provincial final that went to extra-time.

In an exhausting afternoon, it came down to one last play at the end of the second period of extra-time with Donegal captain Michael Murphy standing over a 14 metre free. He let fly with a vicious drop-kick, seeking to wipe out Derry’s two-point lead.

But one of the multiple of Derry players got their body in the road. Nobody cared. The ball broke out wide, Derry players infused with an adrenaline shot as they chased up the field only to hear the three late, sweet peeps of referee Sean Hurson’s whistle.

As captain Chrissy McKaigue said in the opening words of his address after pumping the Anglo-Celt Cup to the heavens, “It was just our time!”

An early goal from Niall Loughlin on eleven minutes sent them on their way to building an early lead. At times Donegal looked oddly passive and only for the spritely movement and scoring of Peader Mogan, they would have been in serious peril.

After the break they decimated Derry’s lead with an early Odhran McFadden-Ferry goal after Derry goalkeeper Odhran Lynch coiuld not hold a drive from Michael Langan.

Thereafter the game swung around the place wildly, but the last quarter belonged to Derry with six of the last nine scores, the last score from a Shane McGuigan free coming ten long minutes from the end of normal time.

Derry outscored Donegal 0-4 to 0-2 in the extra-time periods, with full-back Brendan Rogers both scoring his third, and then setting up Conor Glass for the last point of the game.

It was manager Rory Gallagher’s first Ulster title at the fourth attempt as a manger in his own right.