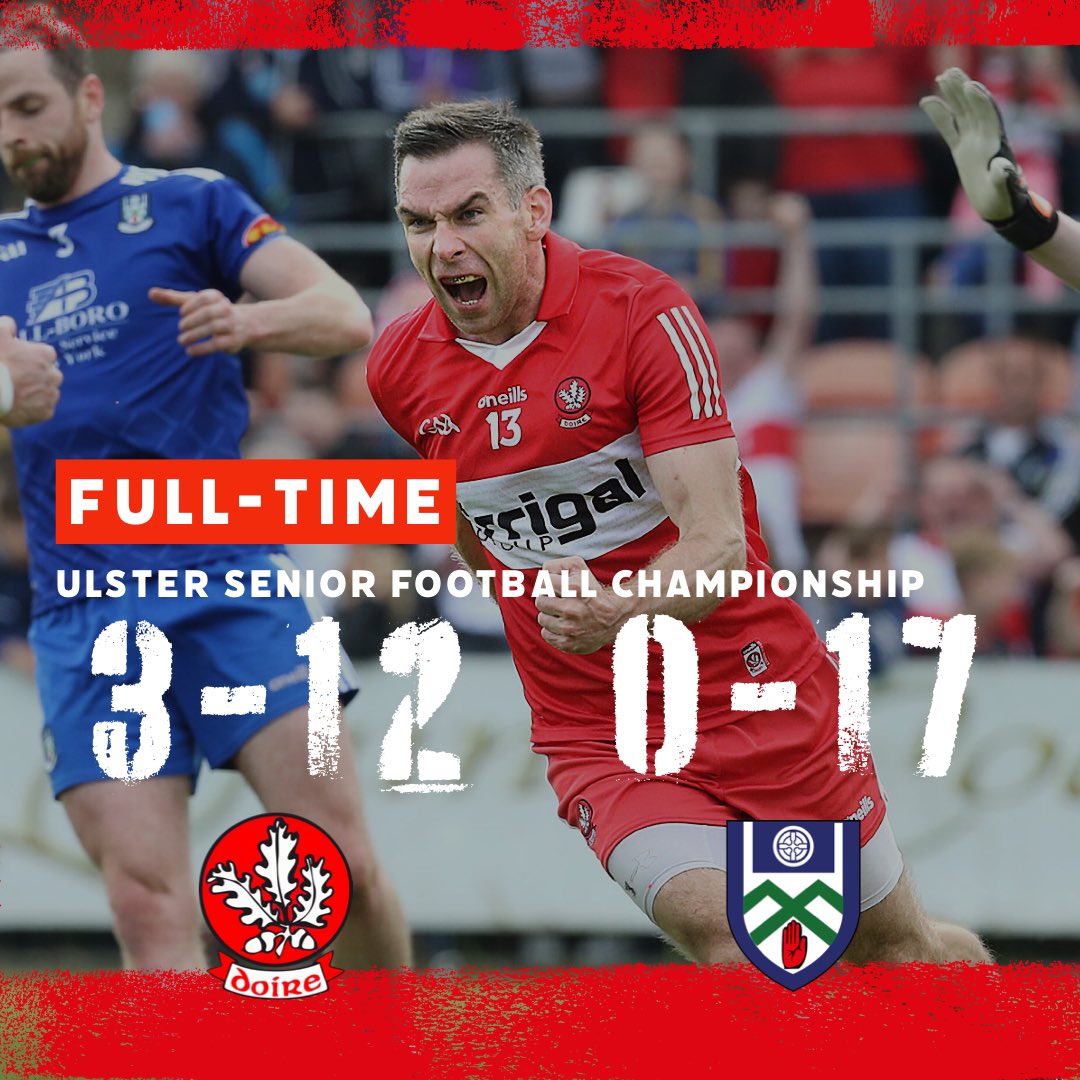 Following up with their win over Tyrone in the Quarter-Final, Derry Senior Footballers produced another big performance when they defeated Monaghan in the Semi-Final at the Athletic Grounds, Armagh, meaning they will contest their first Ulster Senior Football Final in 11 years when they take on Donegal on Sunday 29th May at Clones.

Below report from GAA.ie – By Colm Shavley at the Athletic Grounds

Derry are through to their first Ulster SFC Final since 2011 after a strong first-half performance led them past Monaghan in front of nearly 15,000 at the Athletic Grounds. Goals by Benny Heron and Gareth McKinless had Derry in charge after 22 minutes and although Monaghan cut their deficit from eight points to three at one stage, Heron hit the net once more to lead Rory Gallagher’s side to another statement win over Division One opposition, following their derby defeat of All-Ireland champions Tyrone last time out.

Derry were much quicker to settle, with their defence frustrating Monaghan, who took all of half an hour to find their first score from play. The Oak Leaf County had 1-2 on the board by the time Monaghan got off the mark, as points by Niall Toner and Shane McGuigan were followed by a goal from the strong-running McKinless. A brace of frees by Jack McCarron got Monaghan up and running, but their mountain became steeper when a punt forward by Derry keeper Odhrán Lynch allowed Toner to set up Heron to hit their second goal.

Points by McGuigan and Niall Loughlin opened up an eight-point gap and although Monaghan finally found their shooting boots towards the end of the half via Conor McCarthy, Darren Hughes and Conor McManus, Derry were still 2-7 to 0-6 clear at the interval. Monaghan began the second half with more purpose, as points by Andrew Woods, McCarron and McManus saw them close the gap, but Emmett Bradley carried the ball almost the full length of the pitch to get an inspirational response for the leaders.

Dessie Ward, Niall Kearns and Ryan McAnespie added their names to the scoresheet as Monaghan threatened an unlikely comeback, only for Heron to send a shot looping into the top corner of the net to all but kill the game off.

Paul Cassidy added a brace of points for a much more economical Derry side during the last ten minutes and with Monaghan never really looking like getting the goals they needed to get back into it, they could only manage to narrow the final margin via points by McCarron and McManus.

Derry advance to the provincial decider against neighbours Donegal, while Monaghan head for the qualifiers.