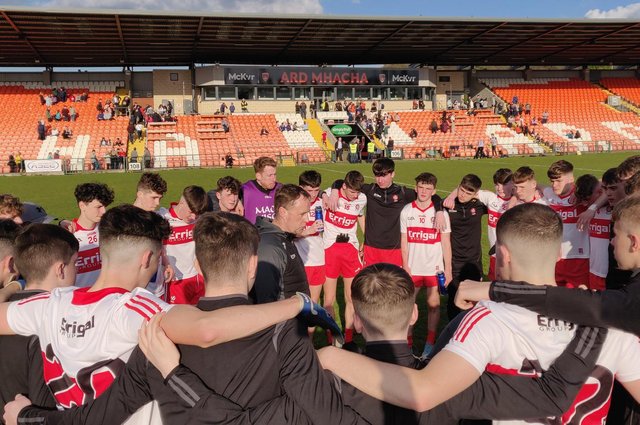 Derry Minor footballers defeated Cavan to reach the Ulster Final against Tyrone and set up a double header with Derry Seniors when they face Donegal in the USFC Final at Clones on Sunday 29th May.

Report below By Michael Wilson of the Derry Journal

The demand for Ulster final tickets in Derry just became greater after Martin Boyle’s Oak Leaf minors booked their place in next Sunday’s Clones showpiece with victory over Cavan in the Armagh Athletic Grounds.

Saturday’s five point victory over Cavan made it six Ulster minor finals in eight years for Derry who had to withstand a late Breffni fightback following a black card for keeper Ben O’Connor. Indeed, it became closer than Derry would have wanted in a game where the Oak Leafers were clearly the better side but Boyle young troops dug with Odhran Crozier’s superb late ’45’ the insurance score that eventually edged them over the line.

Next week will be the first time in 22 years that the Derry senior and minors teams have shared the Ulster final stage with Championship fever gripping every inch of the county.

In truth, the Oak minors were not at their best against Cavan, missing several decent goal chances, but in Johnny McGuckian and Cahir Spiers they had the two best players on the pitch, although Ciaran Chambers ran them both close.

Boyle made one enforced change from the 15 that defeated Donegal at Owenbeg, Conal Higgins coming in the replace injured Oak Leaf captain Ryan McNicholl who was last week ruled out for the remainder of the season with a cruciate ligament injury picked up in the early stages of that quarter-final victory.

McNicholl’s absence was always going to be a challenge but in the opening half Derry set about showing they are far from a one man side. Deploying an intensive high pressing game, the Oak Leafers swarmed all over the Breffni men, dominating both their own and the opposition kick-outs as they built a 0-12 to 0-4 half-time lead.

By the 21st minutes five of the starting Derry forwards had found themselves on the scoresheet and four of those scores had come from open play while a couple of notable goal chances could have taken the game out of Cavan’s reach.

Derry’s pressure meant Cavan were struggling for a way out of their own ’45’, Derry blocking the short kick with numbers and pushing their defenders up high enough to ensure they had ample men around any breaks. Yes, the Oak Leafers had the benefit of the first half breeze but even when Cavan did secure possession, they were turned over too easily inside the Derry half and Boyle’s young players didn’t need a second invitation to counter attack at speed.

Cavan though almost got off to the perfect start when Cian Keaney found himself in on goal but his shot was met by a brilliant Eoin Scullion block which took the sting out of it and set the tone for Derry’s impressive opening half hour.

Boyle’s team were two points up inside five minutes through Eoin Higgins (free) and Cahir Spiers and while Cavan sweeper Oliver McChrystal came forward to get his side on the scoreboard seven minutes in, it was one way traffic.

Dara McPeake teed up Higgins for an excellent second point before Johnny McGuckian made it 0-4 to 0-1 by the 10th minute. The impressive Matthew Smith grabbed Cavan’s second point but Derry replied immediately through Conal Higgins and the dye had been cast for Oak Leaf first half dominance

The Oak Leafers had already seen Cavan keeper Cillian Brady deny them a deserved goal when he was out smartly to block Conal Higgins’ shot but the miss didn’t stop Derry pushing on as points from Ruairi Forbes (2), Chambers (3, 1f), McGuckian and Eoin Higgins illustrated Derry’s control as they turned around with a fully deserved eight point lead.

The second half seemed to be following a similar script as the first, albeit against the wind Derry were sitting deeper and trying to manager possession more than they had in the opening half. The impressive Ruairi Forbes fisted the opening score of the second half but Derry would then go 13 minutes without registering as slowly but surely Cavan built a head of steam. A Lorcan Reilly free and Micheal Smith point was the first time the Breffni men had scored back to back points and brought it back to 0-13 to 0-6 in the 38th minute but still there seemed little danger.

Chambers grabbed a lovely score on the run but that 45th minute point would be Derry’s last score until Crozier’s superb injury tie ’45’ and in the meantime Cavan had asked some real questions.

When Oak Leaf No. 1 O’Connor found himself in a blind alley and surrounded by Cavan men, he was overturned and tripped substitute Cormac Galligan in a desperate attempt to retrieve possession. It meant a Championship introduction for Paudraig O’Neill but it also handed Cavan a huge momentum shift.

Three successive score brought it to a four point game but that would be as close as they got, Derry’s intensive defence doing enough to ensure the Breffni men never got the goal they craved with Fionn McEldowney producing one goal saving tackle on Cavan substitute Luke Allison at 0-14 to 0-10.

It was the type of tackle that wins championship games and it had. Derry settled, Crozier’s ’45’ taking the wind completely out of Cavan sails and ensuring Derry’s double date with Clones.