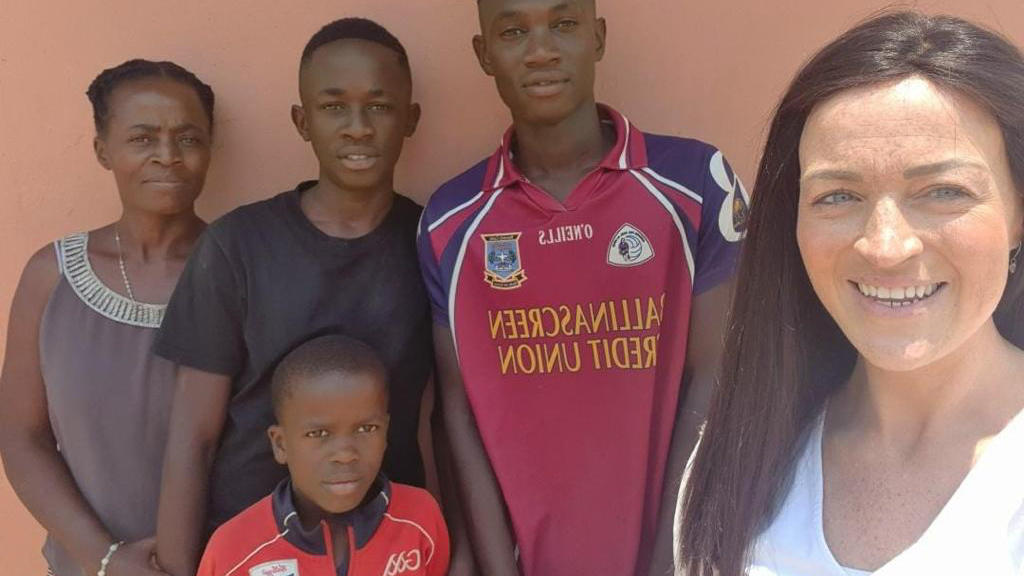 “I have never stopped being amazed by the positivity of the people living in the hardest of circumstances, and in their faith that things will get better.” ~ Anita McWilliams

Anita McWilliams goes walking daily at 6am. She is not alone. The streets of Kitwe, a copperbelt city in northern Zambia, are already bustling with children making their way to school. With 60% of the country’s population below the poverty line and 40% living in extreme poverty, education is the hope that sustains and a cause to which the Ballinascreen woman has dedicated much of her adult life.

“I just couldn’t settle,” she says.

In 2012, during a career break from her job as a children’s social worker with the Western Health and Social Care Trust, Anita visited Zambia for the first time. Her connection with the community in Twafwane was both immediate and lasting. A previous spell working in South Africa in an Aids Hospice and with street children drew her back to the African continent where she entered a cycle of voluntary roles.

“I was very lucky that the Western Trust always gave me the security of a job to return to,” she says. When her money ran out Anita McWilliams returned home to work, but there was always a niggling feeling of unfinished business, something that runs strong in the DNA of many Irish people.

“At the time I only intended to stay one year and kind of thought it would get things out of my system, but it had the opposite effect,” she explains. “I extended for a second to finish building a wee preschool in the community where I was a volunteer.”

It’s a community to where she still returns. Now working for Camara Education Ltd, an Irish organisation whose goal is the provision of education through ICT resources and teaching, Anita McWilliams manages operations across five African countries.

“Although I now have a paid job in a different part of Zambia, my community where I started as a volunteer is still central to my life here. Twafwane preschool could not run if it were not for the support of my friends and family at home.”

One home based initative struck up through Anita’s friendship with Derry GAA’s Chris Collins has seen children in Zambia gifted with excess Cúl Camp gear. The jerseys, tops and bags which are a common sight throughout primary schools and GAA clubs in Derry have been making their way to children in the Twafwane community in Kitwe for a number of years.

“It’s has always been a massive treat for the kids here. At this stage I can not begin to count the amount of jerseys and kits that Chris has sent over but every time I go I am bombarded with requests for kits for a new team. They somehow seem to quickly find out I am back in the community! The jerseys are in big demand and create alot of interest.”

In an area where many people live on a dollar a day the simple gift of new clothes can make a positive difference to their lives. To the children of Twafwane they take on a whole new level of significance.

Anita explains: “When I first came to Twafwane, most of the children were not going to school as many of the adults in the community were illiterate and education was not seen as priority. As the class sizes in the government schools are so big here, kids who do not have the basics going into school really struggle.”

For most of the last decade Anita McWilliams has been back and forth to the African country. The plight of its people have made a lasting impression on the woman from a strong GAA community and family. Anita’s uncle, the late Hugh McWilliams, a strong supporter of his local community, local charities and an advocate for grassroots development shares many similarities with his neice: a common energy and determination to improve lives through hard work; a dedication to volunteerism and a culture of giving. So too the sharp returning focus on the important things in life.

“I think that happiness and the positivity of the people is one of the things I like most about being here,” reflects Anita. “It is so different than the materialistic things we all tend to worry about at home.”

Her role may have changed but the Twafwane community has been a home from home for the past decade for Anita McWilliams. Although continents apart, the hopes and goals of people remain a constant.

“Every time I go to the community, I feel so proud to see how important education has become. I am really hopeful that these kids may have better opportunities than their parents did.”