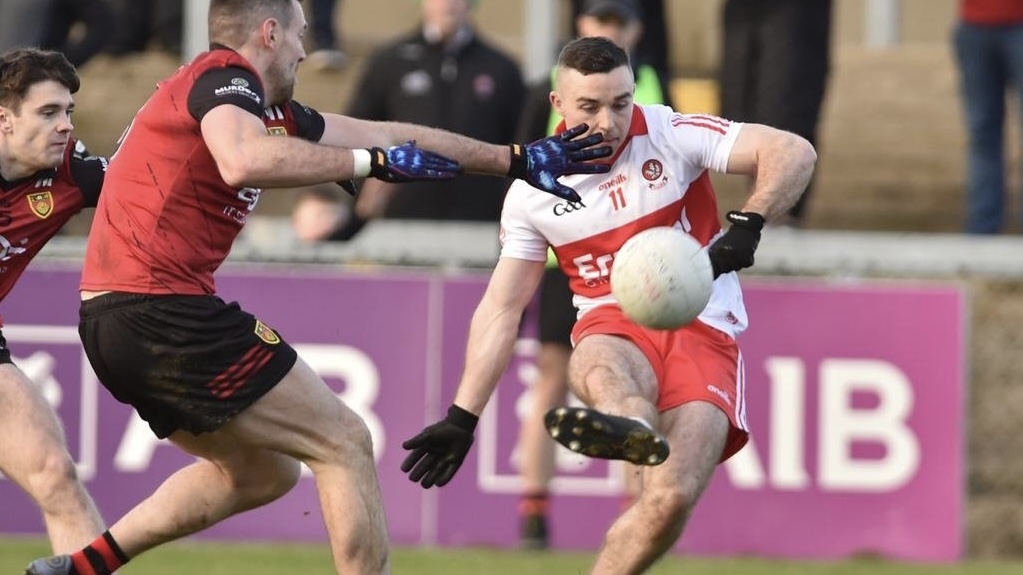 Derry have reached the 2023 McKenna Cup Final following penalty shootout victory in a dramatic contest against Down.

With the last kick in a dramatic shootout, ice cool Derry defender Conor Doherty calmly fired his side into this year’s Dr McKenna Cup final at Down’s expense in a packed Pairc Esler.

This was a pre-season encounter only in name as both sides went at it with Championship-like intensity.

Down, eager to win on their home patch and reach their first final since 2008, and Derry, showing all the class and resilience of Ulster champions, produced a January classic.

Down edged the opening exchanges with newcomer Donnach McAleenan again impressing for Conor Laverty’s men. Derry ambled into proceedings and when they did hit top gear they rattled off 1-3 to no reply

Pat Havern again refocused his side, and Niall Donnelly powered home a goal in the 30th minute after Cassidy was overturned by Odhran Murdoch.

McGuigan however was in sparkling form and the end of the half belonged to him. Curling over two scores the marksman put Derry 1-8 to 1-6 in front at the break.

Upon the resumption Down looked to have put themselves in a winning position. Donnelly drove home his second goal after 27 seconds and minutes later Ceilum Doherty found the back of the net to make 3-6 to 1-8 in the home side’s favour.

Derry can thank Niall Toner for their revival, the wing forward struck three of their next six scores including the lead point with minutes remaining.

In the midst of Toner’s brilliance, Chrissy McKaigue was dismissed. Down fought back to lead again with Barry O’Hagan’s third free of the game.

However, there was still time for yet more drama, Gareth McKinless burrowed through and McGuigan fired over the resultant free to bring the pulsating encounter straight to a shoot-out.

The penalties carried over the exact same topsy turvy nature of the match that preceded it.

McGuigan and Paul Cassidy pushed the advantage in Derry’s favour only for Ceilum Doherty and Odhran Murdoch to fight back and pile the pressure on Doherty to deliver. The Newbridge man duly did, calmly dispatching the winning penalty.