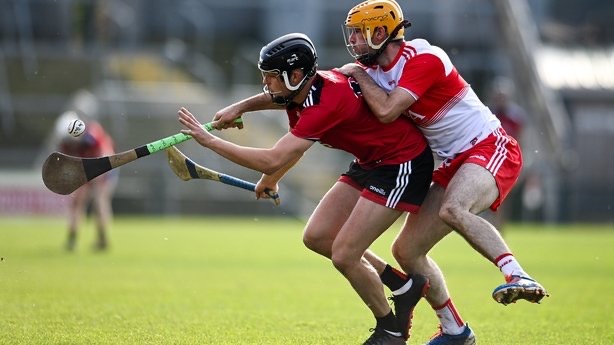 Derry’s hurlers hopes of securing promotion were dashed in Armagh on Sunday following a five-point defeat to Down.

Down waited a long time to avenge their January loss to Derry and the Mourne men also claimed the Allianz Division 2B Hurling league title in the process.

The final was decided by the goals in either half from Eoghan Sands and Pearse Óg McCrickard. The majors gave Down the confidence required to express themselves and they held on for victory.

A scrappy opening to the occasion failed to even produce a score or scoring opportunities as both sides first touch struggled in the first exposure to a competitive environment in months. Such was the struggle, Cormac O’Doherty would open the games account with a free in the 10th minute.

Down’s full forward Eoghan Sands goal came completely against the run of play, stunning the Derry rearguard with a fine fetch and barreling finish. Derry responded through Midfielder Eamon McGill, who landed two points to push the Oak Leafers two ahead at the water break.

Phelim Savage’s wonderful strike from distance ignited Down’s best passage of play as Ronan Sheehan’s side struck four in a row, all from distance as they punished some sloppy Derry play around the midfield.

O’Doherty soon began to flow from placed balls and steadied his side before half time with three free’s to leave the final poised 1-8 to 0-9 at the turn.

Eoghan Sands and McManus combined with two quick points upon the resumption to give Derry a mini mountain to climb in the decider. MacManus was even allowed the luxury of missing three attempts from frees as Derry grew more passive by the minute.

Pearse Óg McCrickard pounced for the killer blow on the 55th minute. Sensing the lethargy after the water break Eoghan Sands had a huge turnover in his own corner back position and still had the vision to set up McCrickard to finish to the net and effectively the game.

Four scores in a row did bring Derry right back into contention, substitutes Paul Cleary and Odhran McKeever with the pick of them, on a day the Derry forwards failed to fire. The situation got worse for Derry, having used all of their substitutes, they had to finish with 14 men when Richie Mullan had to go off injured.

Conor Woods relieved Down’s pressure with a well taken free as they too would end the game with 14 men, replacement Marc Fisher receiving a swift red card. The numerical advantage had no bearing in the finish as captain Stephen Keith got to grips with the new normal to raise the cup.