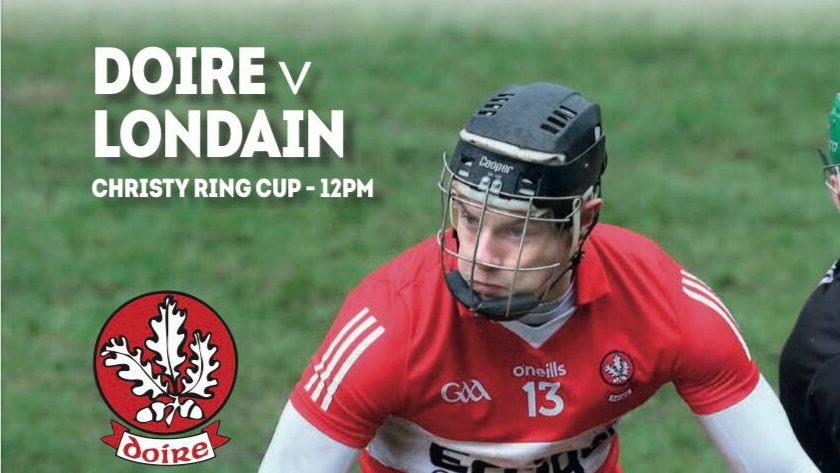 Derry remain on course for a berth in the Christy Ring final after a six point win over a spirited London.

With a baking hot sun on their faces and a brisk breeze at their backs the Exiles burst out of the blocks and raced to a 0-6 to no score lead.

Free-taker Donal Hannon set the tone with his first point of the day, a monster free delivered from well within his own half. Mark Dwyer, Sean Glynn and Colin Nelson all added to their scoreboard as London threw down an early gauntlet at Owenbeg.

Indeed, had it not been for an acrobatic save from goalkeeper Oisin O’Doherty, the home side could have been in deep, deep trouble. O’Doherty also pulled off another worldly save in the second half to round off a fine individual performance on a day when Derry struggled to find their top gear.

A couple of Cormac O’Doherty frees settled the home side a little before Derry finally scored their first point from play in the 20th minute care of Darragh McGilligan.

But a Gerald Bradley goal, the Slaughtneil man thundering to the back of the net, soon after finally heralded Derry’s renaissance. And when Odhran McKeever struck another goal minutes later it snatched the lead for the home side for the first time in the contest.

But just as Derry were finding their form, London finished the half impressively with that man Hannon nailing three more frees to see his side ahead 0-11 to 2-4 at the break.

A powerful third quarter from the Oakleafers, which included their third goal from Tiarnan McHugh and a glut of points from the Mullan brothers, swung the tie Derry’s direction.

Late scores from Eamon McGill, McHugh, and Darragh McGilligan confirmed the Derry win. The Exiles also goaled late on but it was too little, too late.