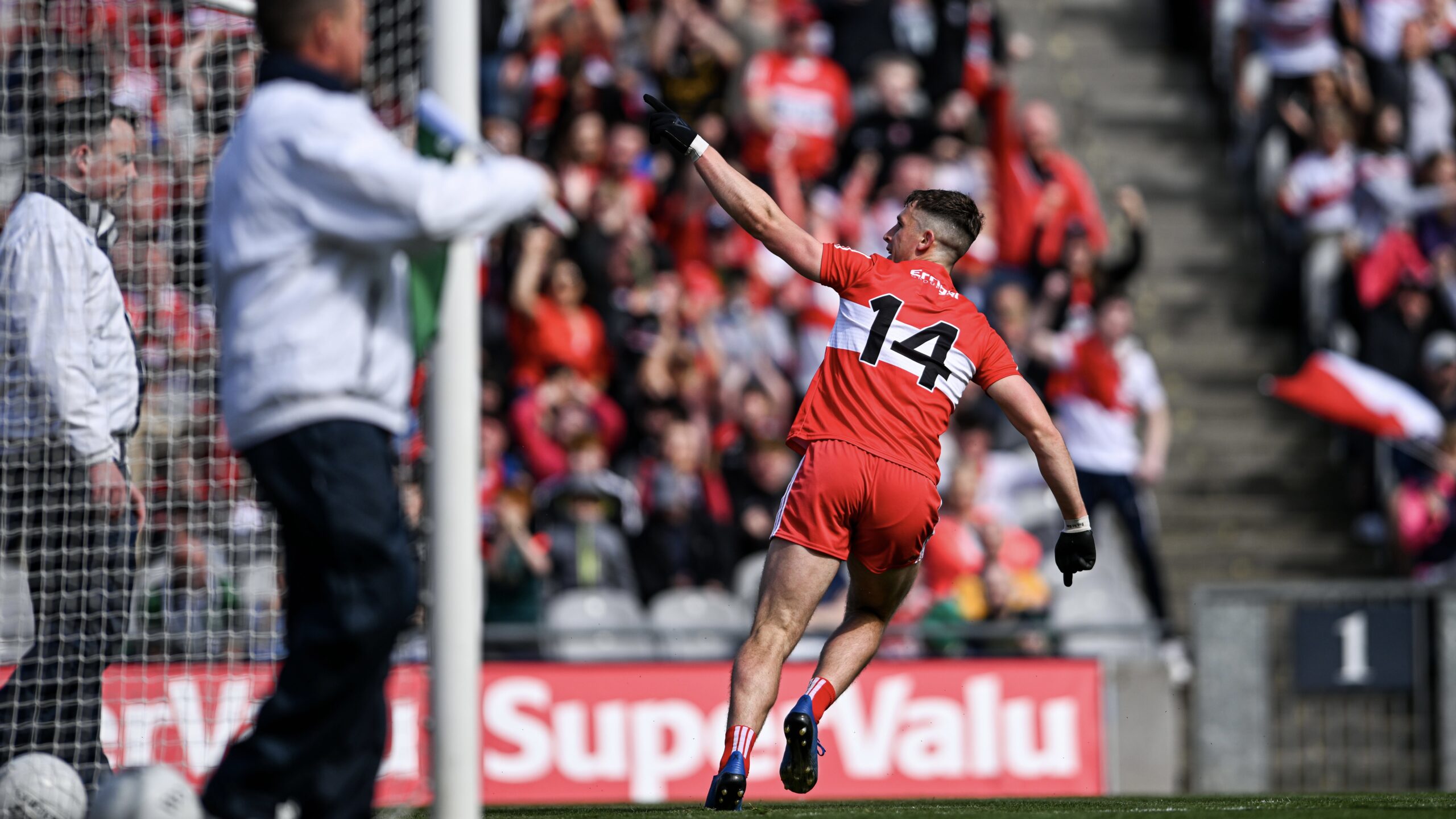 Derry are in an All-Ireland Senior Football semi-final for the first time since 2004, after a well deserved win over Clare at Croke Park in the first of this year’s All-Ireland Quarter-Finals.

Following on from their good form that brought them a first Ulster title since 1998, Derry found the net on five occasions to ensure they will set up a meeting with Galway in the All-Ireland semi-final on Saturday 9th July.

Below report from GAA.ie – By Paul Keane at Croke Park

It wasn’t quite history making but five goals in an All-Ireland quarter-final was mightily impressive all the same as Derry eased through to the last four for the first time since 2004.

For a while, Kerry’s record of seven goals in a quarter-final, from 2015, looked in danger as the Ulster champions struck the net at their ease.

In the end, they stopped at five and powered to a double scores, 14-point win which secures them a semi-final clash with Galway or Armagh on July 9.

Shane McGuigan was terrific throughout and finished with 1-8 while majors inside the opening 13 minutes from Benny Heron and Conor Glass set Derry on their way to the landslide win, their fourth on the trot in this year’s Championship.

Paul Cassidy and Gareth McKinless grabbed the other goals as Rory Gallagher’s side thrived at spacious Croke Park.

It’s the end of the line for Clare, however, having previously beaten Roscommon at GAA headquarters to make it through to the last eight.

Derry tweaked things tactically by positioning Brendan Rogers, their full-back hero in the Ulster final, at midfield alongside Glass.

Emmett Bradley was initially named to start at midfield but was withdrawn before throw-in and replaced by Niall Toner who lined out in a two-man full-forward line next to Heron.

Meanwhile, Shea Downey, wearing number 11, dropped back to defence to cover the gap in the full-back line left by Rogers.

It was a setup that worked nicely for Derry who gained early control of the game and capitalised with 10th and 13th minute goals from Heron and Glass.

Heron’s goal came after a turnover on Clare goalkeeper Tristan O’Callaghan’s kick-out, clearing Ethan Doherty to play in Heron on the left.

Three minutes later, Glass played a one-two with Doherty on the same side of the field and smashed a shot through the gloves of O’Callaghan.

Suddenly, Derry led 2-1 to no score and had the game in the palm of their hands. If the Ulster final taught us anything about Derry, it’s that they’re entirely comfortably playing a patient, counter-attacking game so the seven-point lead played right into their hands.

Shane McGuigan then came storming into the game with three points to help open up a 2-5 to 0-1 lead and already it was looking like the game may be beyond Clare.

They finally gained a foothold in the contest after 30 minutes of difficulties though and reeled off 1-2 in a matter of four minutes – Pearse Lillis cracking in a 34th minute goal – to reduce the lead to six points.

Just when it looked like Clare might be capable of reeling in what was at one stage a 10-point deficit, they coughed up a third goal to Derry just moments before half-time. Rogers and McGuigan were centrally involved in the buildup and Cassidy eventually capitalised with a terrific finish to the top corner.

It all added up to a 3-6 to 1-3 half-time lead for Derry who went a long way towards killing the contest with a fourth goal from McKinless early in the second-half.

The Ballinderry man broke free down the right and booted to the far corner of the Clare net.

McGuigan then got the goal his performance deserved in the 48th minute and almost struck a second late on when he pounced on an errant kick-out.

Still, five was more than enough and while Eoin Cleary, who finished with 1-5 for Clare, pulled back a second Clare goal it was no more than consolation.