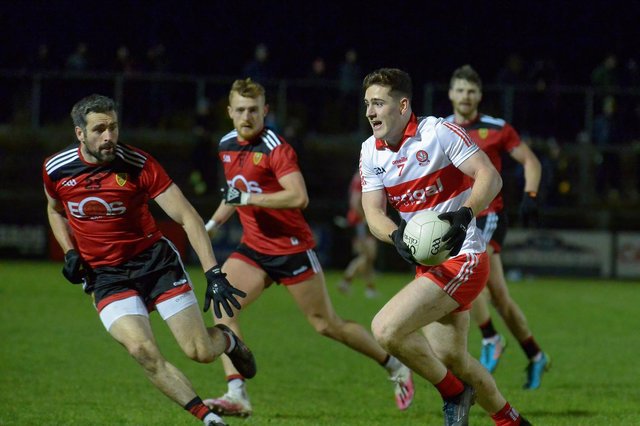 Derry’s senior footballers opened up the 2022 Allianz League campaign with a hard-fought seven-point victory against Down on Saturday night at Owenbeg.

Niall Loughlin’s goal midway through the first half was crucial as Derry proved too good for Down at Owenbeg.

Andrew Gilmore, with three points, top scored for a Down side who struggled to find any real rhythm throughout the 70 minutes.

Contrasting Dr McKenna Cup campaigns allowed both Rory Gallagher and the returning James McCartan to at least blood a number of promising youngsters.  But despite under 20 graduates Odhran Murdock and Andrew Gilmore both catching the eye, shorn of any blue chip Kilcoo players Down stumbled to defeat against Antrim and Donegal.

Derry, for their part, unearthed a couple of potential gems in teenagers Lachlan Murray and Matthew Downey in those early season run outs.

In a division expected to be tightly contested, a winning start seemed essential.

The Mournemen, almost unrecognisable from the team that defeated Derry when last they crossed swords almost two years ago to the day, with league debuts awarded to Finn McElroy, Ruairi McCormack, Odhran Murdock and Andrew Gilmore.

An injury time Matthew Downey free stretched Derry’s half-time lead to 1-6 to 0-4, with the scoreboard adequately reflecting the Oakleaf dominance. A beginning that offered hard graft over crowd pleasing artistry, saw little to separate the sides – both amassing 0-2 apiece in the opening quarter. Shane McGuigan and Paul Cassidy’s scores equalled by those of Ruairi McCormack and Darren O’Hagan.

Derry found a quicker gear after that. They hit four of the following five scores with Niall Loughlin’s goal in the 18th minute the key score. Young Lachlan Murray and Ciaran McFaul were also among the scorers, with just Andrew Gilmore’s point and a Barry O’Hagan free keeping Down’s interest in the contest.

There were fully 14 minutes gone in the second half before Derry added to their tally courtesy of a delightful Ciaran McFaul point. But in a low scoring second half, that point heralded three more with Conor Doherty, Niall Toner and Paul Cassidy all raising white flags as Derry eased to the winning line. Frees from Andrew Gilmore book-ended those Derry points in a disappointing night for the Mournemen.

Conor Doherty, Ciaran McFaul and Conor McCluskey all caught the eye for the Oakleafers.