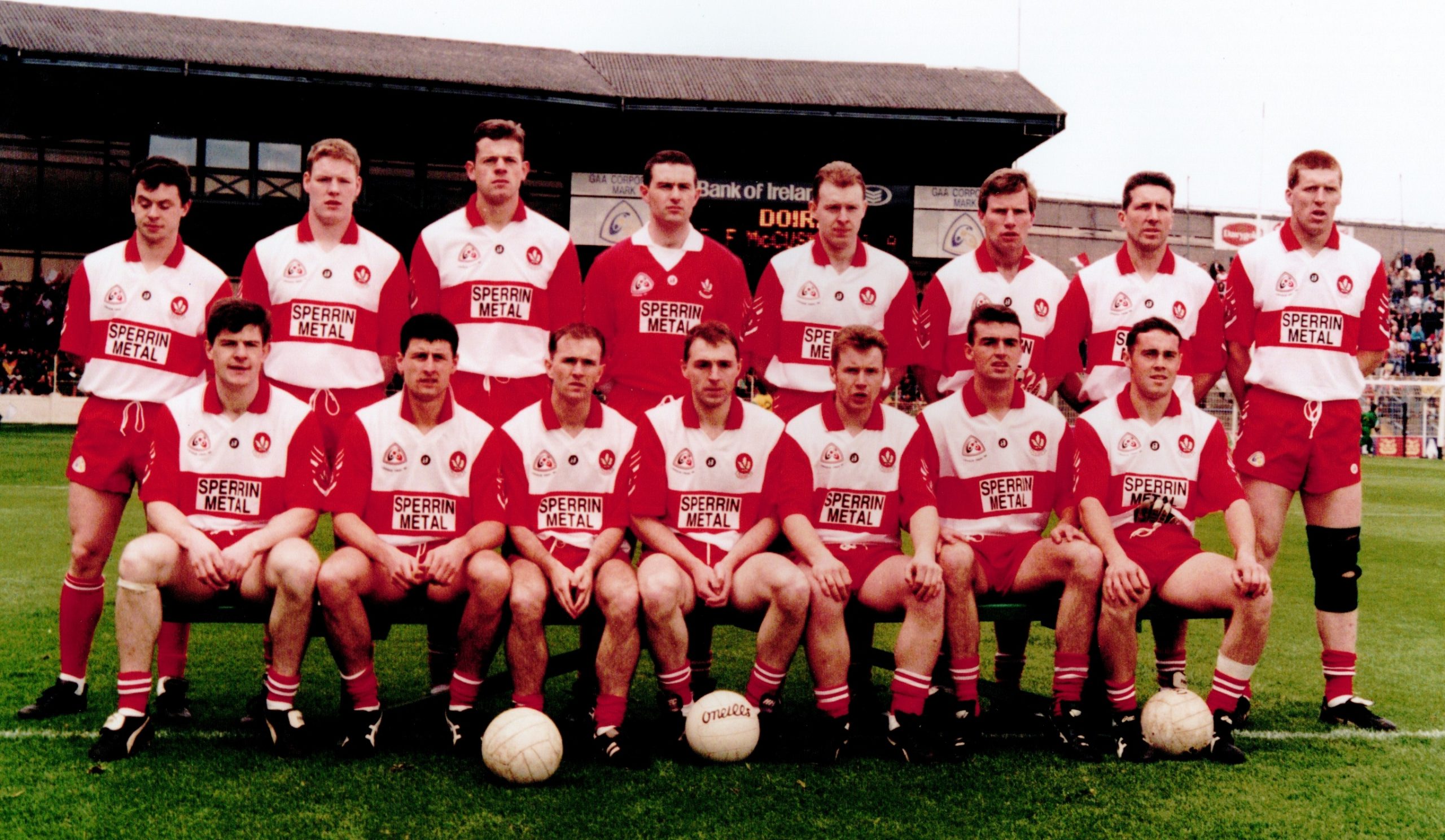 Events in Clones in June of that year defined Derry’s season and for many, defined the era. In the days before the qualifier system, the Oak Leafers’ Ulster semi-final defeat to neighbours Tyrone resulted in the premature conclusion to the success of their golden generation, and a sudden end to Ulster’s dominance of the All Ireland championship.

But earlier that Spring, Derry’s prospects looked much brighter.

Leaving Croke Park on a Sunday in mid-May, they had another national title in their hands, having captured the NFL crown for the second time in just four years.

It’s fair to say Derry’s 1994/95 league campaign began in a state of severe ignominy. Due to the egregious sacking of Eamonn Coleman only weeks earlier, the Oak Leaf squad in October 1994 was thread-bare.

It resulted in a big loss at home to Laois to kick things off and suddenly winning another Church & General National League title was the last thing on anyone’s mind. Relegation appeared a more likely option.

But Mickey Moran’s squad eventually reached something approaching full strength and by the time the spring of 1995 came around – shortly after Eric Cantona had taken matters against soccer fans into his own hands (or feet), John Bruton’s Rainbow Coalition had assumed control of the Dáil and St. Pat’s Maghera had assumed control of the Hogan Cup – Derry found themselves in familiar territory, at least by early 90s standards: occupying one of the top two positions in Division One.

They qualified for the quarter-finals behind only Laois, with Kerry and Donegal (who had to endure a two-game playoff series with Kildare, in the era before a points difference column was added to the NFL table) also emerging from the top division.

Clare and Tyrone joined the last eight out of Division Two, while there was also a place for each of Cavan and Monaghan who topped Divisions Three and Four respectively. And you think the current makeup of the GAA’s competitions are an exhibit of shambolic irrationality?!

At the other end of the table, the previous Autumn’s All Ireland finalists, Down and Dublin, both found themselves relegated.

Considering this was back in days when the NFL started about two weeks after the All Ireland Final (you think the current calendar is an exhibit of shambolic irrationally?!), perhaps this wasn’t much of a surprise. But their drop to Division Two for the 95/96 campaign actually precipitated a lean spell for both the Dubs and the Mournemen, who failed to recapture their dominant form in the latter half of the decade.

In fact, Down would finish rock bottom of the second tier the following season.

Derry’s win over Cavan at the Athletic Grounds on Easter Sunday of 1995 was functional, in a game that failed to truly ignite. But at least it offered the squad an opportunity to prepare for the Ulster SFC opener at the same venue a few weeks later.

The NFL semi-final proved to be a dress rehearsal also.

The Oak Leafers defeated Tyrone (1-8 to 2-3) after another low-key performance, in a sunny semi-final encounter at Croke Park. The game lacked the intensity, edge and bitterness that would define their meeting later that summer.

Although they never pulled away from Donegal at Croke Park, Moran’s men appeared in control throughout and won on a scoreline of 0-12 to 0-8.

As these brief highlights show (below), Seamus Downey was a focal point of the Derry attack…

This was due in part to the crazy new football rule du jour: during that league campaign, teams were only permitted to handpass the ball once per team possession.

It resulted in some awkward-looking kick passes and more individual solo runs than normal, as players tried to acclimatise to the unnecessary and unnatural regulation. But Downey made hay, laying off several scores for supporting runners and capping his performance with a point close to the end of the game.

This was the season following the so-called Derry/Down “classic” at Celtic Park and the tail end of one of the most exciting eras of Gaelic Football in which Ulster teams jumped to national prominence.

And yet the powers-that-be still found a need to tinker.

A nostalgic yearning for ‘better days’ has always existed… even when the going was good.