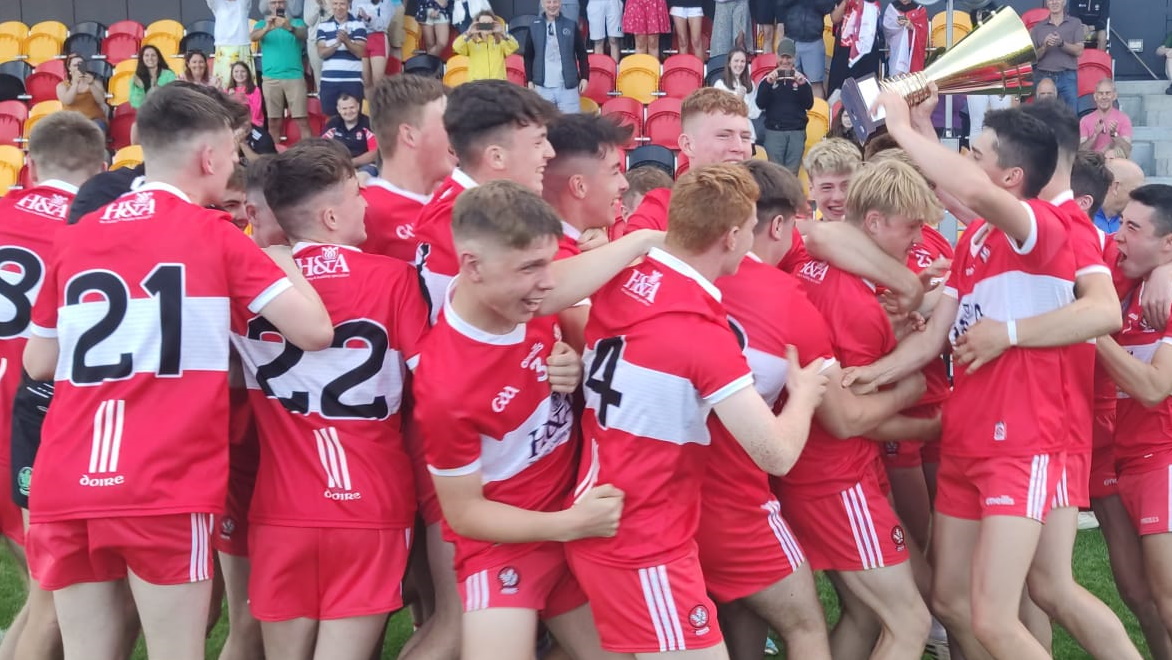 Although this was their first tilt at Division 1 (Corn Michael Hogan) level after previously winning back-to-back Corn William Robinson titles in 2018 and 2019, the Young Oakleaf side had to battle hard, before coming through in the Championship quarter with a blistering scoring spree.

The game was played in Abbottstowns at 6pm to accommodate the Wicklow mentors who where also involved with their senior side who were playing Offaly in the semi-final of the Christy ring cup, in Tullamore.

The game was very edgy from the first whistle with both teams looking a bit nervy for the occasion.

The Garden County, where first on the score sheet after eleven seconds after captain Austin Brennan drove through the centre before off loading to wing forward Adam Prunty who split the posts.

From the resulting puck out, Derry won a free inside their own 65m line, where vice-captain James Friel, used all his composure to send the ball to the right side of the pitch into the wind and curve it right over the ball spot. A tremendous score from a man who would go on to have a major influence on the game.

After a few wasted scoring opportunities by Derry, Wicklow hit back with another point from Prunty under a lot of pressure from the Red defence.

It was a real battle to gain and use possession, before Centre forward Eoin Scullion, broke onto a loose ball in midfield and the strong running lavey man drive forward and levelled the scoring from 45metres.

Momentum seemed to be in the Oak Leaf favour with midfield pairing of McNamee and McKenna settling into the game. McKenna making his first of many interceptions sent a long ball to clubmate Conor Murtagh, the lively corner forward who gave the Derry men their first lead of the day.

All the pressure was coming from the Derry men, with O’Mianain everywhere and the solid half back line of McBride, Friel and Duffin repelling every Wicklow attack and every ball that managed to make it past them, was swept up by the Lavey Rock Darragh Young.

Wicklow were quick out of the blocks and only for the post and a poor 20m free, could off been one up after 20mins. The Garden county’s pressure prevailed and in the 24th minute they started a scoring spree with points from corner forward Willie Cash, a superb point from the midfield monster Finn Treacy and a great score from the left side of the field from captain Austin Brennan to give Wicklow a two-point advantage.

A long ball from O’Mianain in the 25th minute into the square saw Cassidy leap like a salmon in the Moyola to snatch the ball, land, and only for the game’s ‘Best and Fairest’ winner Cian Deering, it surely was a goal.

It wasn’t long before an interception by Friel and long ball into the space in front of Cassidy did the younger brother of county stars Brian and Sé, lift twist and drive over the bar to put one between the sides.

Friel evened the scores again with a 65m free before Wicklow took a slender one-point lead from dangerous, nippy corner forward Willie Cash. They lead at the 0-6 to 0-5.

After a thrilling first half, it was Derry who took the game by the scruff of the neck.

Lavey Defender Charlie Curley replaced corner-back McAteer, and after a middle third battle, the ball broke out to James Friel who hit a precision pass to corner forward Cassidy, he tried to drive inside the tight tackling Deering, but wisely recycled the ball to O’Mianain who showed tremendous leadership and split the posts from the left wing.

This important score was the start of a game changing quarter by the Oak Leafers. Big Segdae Melaugh broke onto a poor clearance from the wicklow full back line after great pressure from Murtagh. The big Lavey forward stuck on the run to take Derry into the lead.

The midfield due of McKenna and McNamee were at it gain, giving up nothing and fighting for everything. When McNamee was pulled down for a free, he got up, got the ball to Friel and the Swatragh man duly obliged and split the posts again from 60yard in his own half of the field.

It was all Derry now.

Semi-final impact sub Paddy Reid was soon brought in. A long ball in, saw Reid put pressure on the goalkeepers clearance, the Oak Leafers could smell blood, and after turning over the Wicklow defence, that man Melaugh, broke onto the ball 50yards out. He broke past two oncoming defenders and from the left edge of the large rectangle drove the ball to the right top corner giving Billy Molloy no chance.

It was a massive score, and was followed-up again by the Rafters Man Friel. A monster point from his own 65m line from play.

Wicklow were in all sorts of trouble and couldn’t get into the game as was the pressure placed on them by the Derry machine.

After a missed free from Wicklow, Derry hit back with a brilliant individual effort from Cassidy. The follow up Wicklow puck out was swarmed on by the Derry middle unit, a long ball into space saw Murtagh do the Murtuagh turn, lift and run 40metres, step inside and shoot low to the bottom right corner to put the Oak Leafers in a commanding lead.

The third quarter was all Derry and this was typified by the next score. Derry hunting in packs, a ball recycled by Wicklow was chased and turned over by the lavey terrier Charlie Curley, he flicked the ball to the Friel Steam train, who broke through, settled himself and fired over from the Wicklow 65m line. James followed up from free from his own 45m line after a high challenge on McNamee.

Before the water break, Wicklow eventually got onto the score sheet after a long free from Brennan, broke out and was sent over by wing forward Shane Byrne. The Wicklow comeback was on when Dan Redmond, broke through what was an impenetrable Derry defence, he shot towards goals but the outcoming Kelly and a great hook from Lynch’s defender Dunne saw the ball go wide.

After some great work by upheld O’Mianain, Melaugh cancelled out the Wicklow score with the resulting free, to take Derry into a commanding lead of 2-12 to 0-7.

After the break it was Wicklow who struck first, a long effort from midfielder Riain Waters. The reply was swift and a long ball from Friel into the corner for Cassidy who turned and fired home.

Wicklow again went on the attack. But an interception by substitute Oisin O’Kane was played to McNamee. After shipping a big hit, McNamee, who was now on his knees, fired a pass to the wing to the powerhouse Melaugh. Segdae turned his man right on sideline at the halfway line and took off like Kyle Hayes speeding past 5 defenders down the line, shipping a couple of slaps of hurley, sent the ball over the bar from the 21m line.

Cassidy found himself straight through on goal in the 25th minute, but only for a superb save from Wicklow net minder Billy Molloy, and a flowing goal line save from Deering, would have had the full forward line each raising a green flag.

Wicklow captain Austin Brennan, was doing everything in his might to get his troops back into the game, when he lobbed a 45m free into the Derry square, the Oak Leaf defence could do very little to stop Cormac Byrne’s shot hitting the net.

Another Wicklow onslaught, saw the Derry replacements link up well, a Curley intercept and off load to Oisin McNicholl whose long ball down the left wing found the oncoming Paddy Reid, the hard-working Reid turned and split the posts from the edge of the D.

The last score of the game went to Wicklow, who although were well beaten in the third quarter, never gave up the fight. Substitute Maurice Sheil sent over a lovely free from the just inside the Derry 65m line.

The resulting puck out by Odhran McElhinney saw the referee bring the game to a close.

In a real good sporting match, saw a bit of mutual respect between two great teams, where both teams gave each other a guard of honour following superb speech from Ruairi O’Manain.

National Director of hurling Martin Fogerty presented the Derry Captain with the cup which saw the Division 1 Michael Hogan trophy heading to the Sperrins.

As Ruairi said “lads, we have some team!”