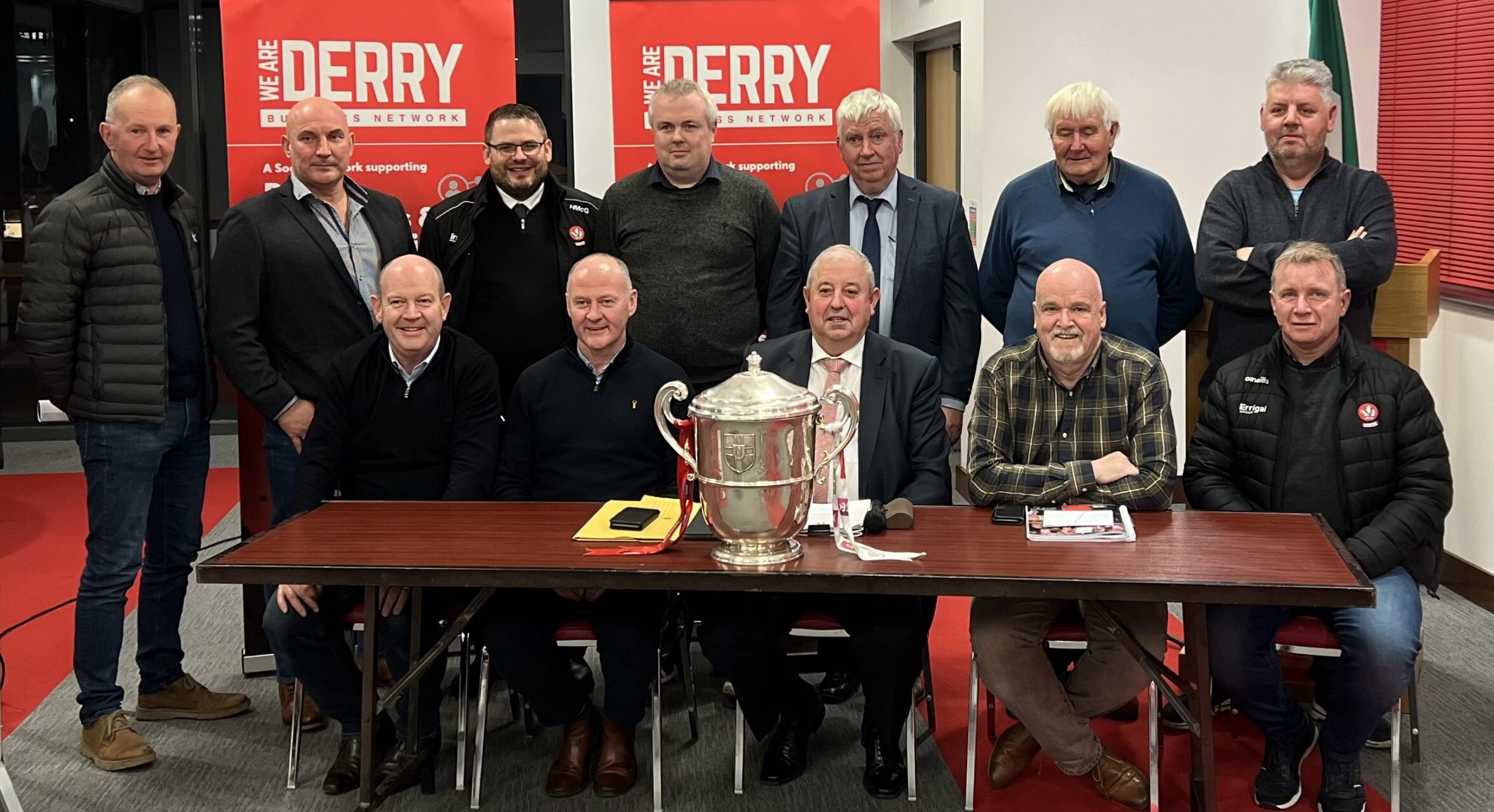 The 2022 Annual General Meeting of Derry GAA was held at Owenbeg on Tuesday 13th December.

Re-elected as chairman of Derry GAA, John Keenan covered a wide range of topics in his address to delegates.

We saw the Derry GAA family at its best this year. Vibrant, young and forward looking, the scenes on the pitch at the end of the game in Clones will live long in my memory as they will for many families. I am particularly mindful of the Henry and Young families tonight. A few days after that final whistle, and being pictured in an iconic photo with Chrissy McKaigue, young Jack Henry passed away at just 5 years of age. The strength of his parents and family circle are inspirational and a reminder to us all to cherish what we have here today and every day.

Chrissy McKaigue is the epitome of a leader and I was delighted to see Chrissy and Conor Glass awarded All-Stars for their efforts this year. They are integral to both their clubs and their county. There were minor All-Stars for Ruairi Forbes and Johnny McGuckian, following another successful year for Derry minors. Mark Craig shone for our senior hurlers, picking up a Christy Ring All-Star Award as the team gained promotion securing the Division 2B title. I want to thank both Rory Gallagher and Dominic McKinley for their dedication and hard work throughout the season.

We’ve established the We Are Derry Business Network which is a vibrant and positive grouping which came together several times throughout 2022. Club Derry continues to deliver for our county through their individual memberships and fundraising events.

We believe strongly that we must always innovate. We were the first county in Ireland to have their own training facility. That was ahead of its time and we are determined that we stay ahead of the game. We have secured funding for the renovation of our existing administration block. This will preserve and make the facility available for generations to come, a home for all codes of Gaelic games administration. This work gets underway in the new year and is expected to be completed for spring. Like any progressive business or organisation we must always be strategic and plan for the future.

I would like to deliberately make a special mention of Cormac McCloskey and Errigal Group for everything they do for Derry GAA. It was absolutely marvellous that through our combined efforts this year that we were able to bring such joy to the people of the county with the Errigal brand thronging the streets of Clones and Dublin this summer. Cormac is first and foremost a Gael. He’s a passionate club man and a supporter of Derry hurling and football teams and takes the same pride as we all do in both. I’m also mindful of the fact that Cormac’s father passed away in recent weeks. The McCloskeys, through the stewardship of Michael, are perhaps the epitome of a GAA family and what we try to achieve together.

I’m not an expert on fixtures but I want to make one point to this meeting about the future of fixtures and fixture planning. This split season, as it has come to be known, is the single biggest departure from anything that we have seen in our lifetimes across GAA fixtures. What’s more, we haven’t actually seen it in action yet. Next year the All-Ireland series is radically different both in structure and timing from anything we have seen thus far. The term split season is bandied about in the media and in conversation often without any realisation for the knock on impact for our own domestic competitions.

Our CCC is both hardworking and innovative. The sheer scale of the operation involved, attempting to keep many plates spinning at the one time, is daunting to my mind and we are incredibly lucky to have the committee that we do. I want to thank Kieran along with Stephen and all the committee for the work that they do, with a special mention for Briege O’Neill. Her attention to detail combined with her work ethic and all delivered with a sense of humour and humanity mark Briege out as a special person that we should all be very thankful to.

We are also proud and delighted to be able to have been awarded the GAA World Games, which will take place in the county next July and bring people from all over the world to experience our culture and hospitality in Derry.  The GAA have seen what we can achieve in Derry with the hosting of national events in the past, such as Congress in 2013, and they’ve once again put their trust in our county and officers to deliver. I want to thank Stephen Barker for his assistance in putting together this bid.

We’ve had a memorable year during 2022, emerging from the uncertainty of the pandemic. That’s down to the hard work of our players, volunteers and our clubs over not just the last 12 months, but the last 10 years and maybe more. Long may it continue.

I wish all our Club units, our County Squads, our staff, each and every friend and member of Derry GAA, wherever they may reside, a very peaceful Christmas, and a healthy sporting New Year.