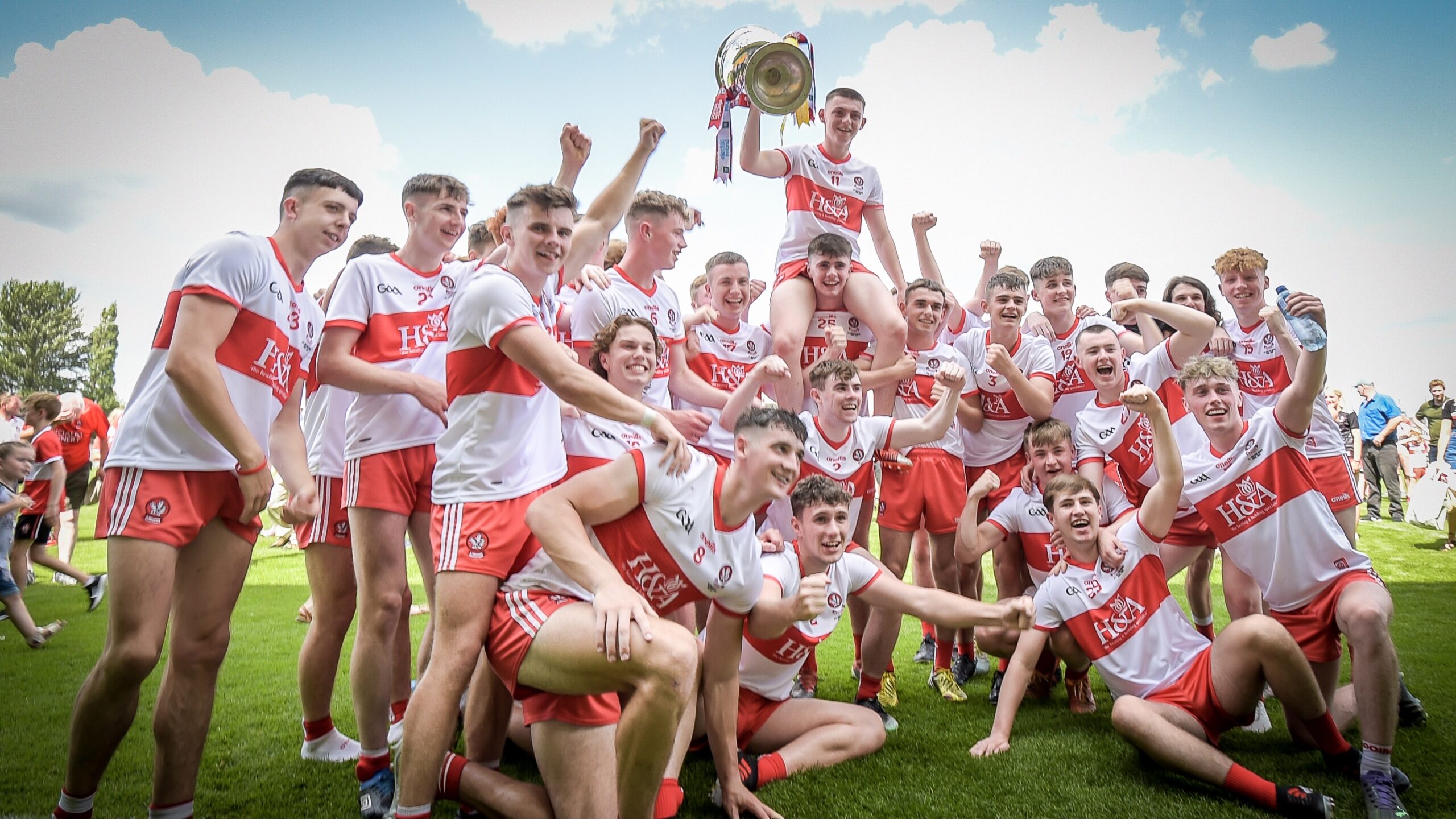 Had the contest finished with 56 or 57 minutes on the clock, it would have been an excellent game in it’s own right. Kerry were fractionally the better side in the first half, and just about earned their 0-7 to 0-4 interval lead. Their free scoring attacking unit, that wreaked havoc and harvested 3-21 against Roscommon, struggled to break through the best defensive unit in this competition so far, with Patrick McGurk and Lee Brady both exceptional close to the Derry goal.

It was a similar story at the other end however. Matthew Downey and Eoin McEvoy kicked two wonderful points to open the scoring in the first five minutes but from then on Derry struggled to unlock the narrow, packed Kerry back line.

With space close to goal at a premium, Kerry started to lean heavily on their power runners in the middle third, particularly Paudie O’Leary, Cillian Burke and captain Oisín Maunsell.

The crucial moment of the opening half came immediately after the water break when a long, probing ball by Conor Shiels broke to Niall O’Donnell, whose first time effort along the ground was blocked on the goal line by Cian O’Donoghue. The score would have placed Derry two points up but James Costello’s Kerry side punished the miss, with William Shine kicking two scores, one off either boot. Although Mark Doherty ended a 15 minute scoreless spell for the Ulster men before the break, Keith Evans rounded out the half time scoring for Kerry, who kicked all seven of their first half points from play.

With five minutes gone in the second half there was yet another vital swing moment, but this time the break of the ball went Derry’s way. Cillian Burke burst through on goal with a typical barnstorming run, striking a low shot that drew a good save from Kian McGonigle. Derry broke quickly with Matthew Downey, Doherty and McEvoy combining to set up full forward Lachlan Murray to palm the ball to the net.

Derry gained momentum after that goal but they were never able to move four points up, even as Kerry’s dangerous forward unit starved of possession. However, two Cian McMahon points moved Kerry within one, and as injury time loomed, a remarkable period of play saw goals at either end, and missed chances that could have changed the result.

Up to now, this was a really good game. Now, it was about to move to another level.

It looked like the Ulster side would experience further final heartbreak, having lost heavily to a David-Clifford-powered Kerry team in the 2017 showpiece event, as a calamitous short kickout allowed substitute Maurice O’Connell to toe poke the ball in to an empty net. Once the ball hit the floor with Kian McGonigle off his line waiting for a pass, there was an incredible moment where it seemed as if time stood still. Ever so slowly, the ball trundled across the goal line, and once it did, the roar from the Kerry crowd was deafening.

Their joy was short lived. Derry went straight up the other end and when Niall O’Donnell’s shot was blocked by Kerry goalkeeper Sean Broderick, referee Jerome Henry deemed it a foot block and awarded the penalty.

Matthew Downey, whose father Henry captained Derry to the All-Ireland title in 1993, rifled his shot straight down the middle with incredible composure and power. But still, there was time for more.

Substitute Darragh Fleming slalomed around a tackler and tried to fire in another goal, but his shot, while on target, was at a good height for Kain McGonigle to make a save. Oisín Maunsell took on the responsibility and drove at the Derry goal and tried to pull off a difficult shot on the run, but didn’t find the range. Then, with what was clearly going to be the last play of the game, Cillian Burke was fouled on the left-hand sideline, and Cian McMahon stood over an incredibly difficult free.

As the ball sailed through the air, the tension was unbearable, and the agonised look of the young Dr. Crokes player made it clear that he had given it every chance, but that it was close. Much to Derry’s delight and Kerry’s despair, it sailed just past the posts on the right hand side, and one of the longest-running championships of the modern era had finally come to an end – a conclusion that will be celebrated in Derry for a long time to come, and remembered everywhere.