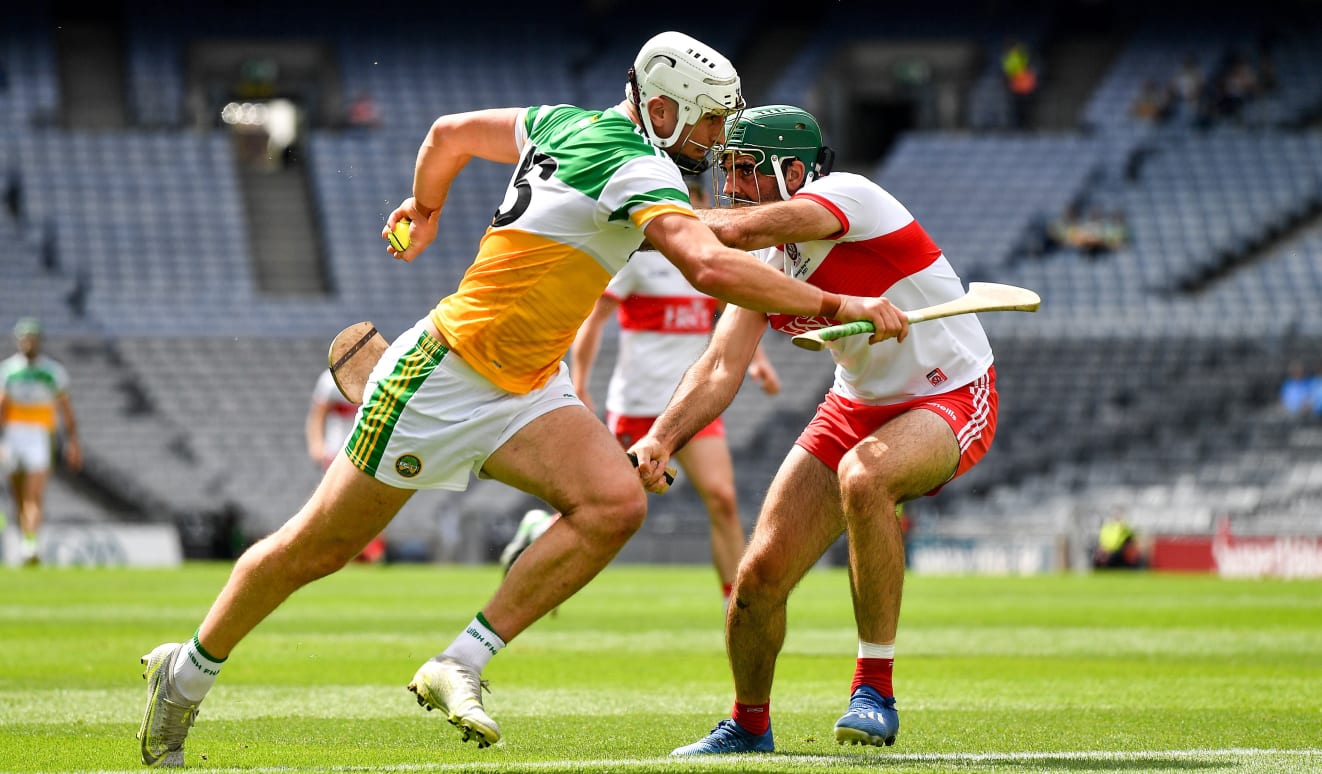 A scintillating display of scoring, backboned by 0-25 from the full-forward line combination of Eoghan Cahill, Oisín Kelly and John Murphy, eased Offaly to the Christy Ring Cup title this afternoon at Croke Park.

The Faithful County travelled up to Dublin 3 carrying both the weight of expectancy and the memory of last year’s shock defeat to Down at the semi-final stage of this competition, but they quickly set about putting distance between themselves and Derry in this fixture, taking a nine-point lead into the first half water break.

The sides shared the first four points equally with Kelly and Murphy on the mark for Offaly before an excellent strike over the shoulder from Brian Cassidy was followed up by a Deaghlan Foley score.

The next ten minutes saw Offaly move through the gears however, as they picked off some outstanding scores while shooting into Hill 16 from every possible angle. Leon Fox split the posts from the left-hand sideline, Liam Langton got stuck into a ruck to win a possession that he fired between the posts, while John Murphy was on fire for the midlanders, picking off three in a row at one stage.

The reset for the water break helped Derry to get their defensive structure back in order and they got a huge boost when Gerald Bradley collected a good lateral pass from Brian Cassidy, stepped inside his man and fired the ball low past Conor Clancy, cutting the gap back to six points.

Offaly didn’t miss a beat however, and were soon back on the scoring path. Eoghan Cahill started to make an impression on the scoreboard from frees and from play, and while Derry’s decision to play their half back line quite deep meant that they protected Oisín O’Doherty’s goal quite well, Offaly quickly picked off the points to move 0-19 to 1-7 ahead by half-time.

Oisín Kelly continued to pose a huge threat with his size and speed in the corner, Cahill’s accuracy continued to be right out of the top drawer, but perhaps most important of all was how Offaly were utterly dominant in the physical battles around midfield and half back, ensuring a very steady flow of possession.

Luke O’Connor, Shane Kinsella and Shane Dooley all chipped in with a couple of points each off the bench as the gap was pushed out to 20, before Derry struck the net for a second time. Odhrán McKeever was the man on target this time, rifling the sliothar into the roof of the net from a tight angle, but with five minutes to play, Offaly still continued to hurl relentlessly in pursuit of the magical 40 point mark.

Substitute Damien Egan was the player who raised their 40th white flag in the 70th minute, with Killian Sampson rounding off the scoring in stoppage time.