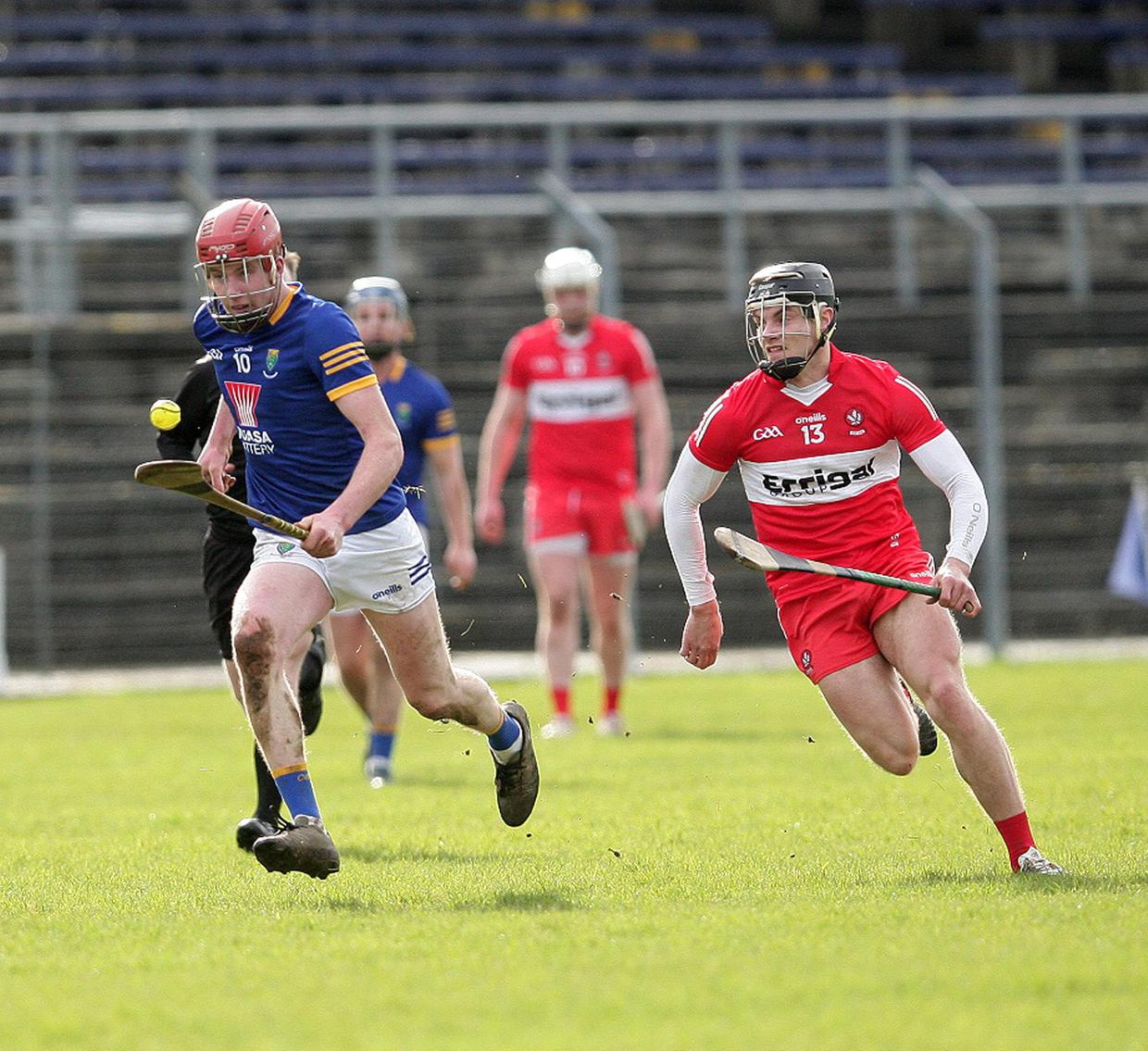 Having won Division 2B and gained promotion to 2A for 2023, Derry’s Senior hurlers had little time to dwell on their success as they were straight into Christy Ring Cup action when they hosted Wicklow at Celtic Park on 10th April.

Wicklow got off to the worst possible start in the Christy Ring Cup when they fell to a 12-point defeat to Derry in Celtic Park last Sunday afternoon.

Even with the morale boost of having survived relegation by pipping Mayo in Tullamore, the Garden County were still facing a stiff task when facing the Oakleafers who were coming into the meeting full of confidence off the back of their unbeaten league run which ended with a title and promotion after last weekend’s win against Sligo.

This is Wicklow Newsletter
The local stories that matter in the Garden County, delivered directly to your inbox every week

Sign Up
And that’s exactly how it turned out to be.

Despite trailing by just four at the break and an Eoin McCormack goal bringing them back within sight of the home side after 48 minutes, Derry were always in complete here and, going on other results, the result of next weekend’s game against Mayo may well have a huge bearing on their Christy Ring survival.

Wicklow traveled up to Monaghan on Saturday where they stayed overnight in a hotel to break the long journey to Derry.

With Seanie Germaine not featuring, the free-taking duties were shared by Brandon Ryan, John Doyle and Owen Young who came in in place of Torna Mulconry in the first half.

A very positive sight for Wicklow hurling supporters was the inclusion of the name of Bray’s John Henderson on the team list, although he didn’t feature in this game.

The quality defender was also in Ballinakill for the meet and greet session last Tuesday night and will hopefully boost the squad if he makes it back into the team as he recovers from injury.

Derry started the game with Odhran McKeever and Richie Mullan as the inside men, with Cormac O’Doherty pushed forward and late addition Ryan Mulholland providing the support for Darragh McGilligan in midfield, with Conor Kelly sweeping up any danger in front of his defence.

Wicklow got the opening score of the game after three minutes when Brandon Ryan found space in the midfield and sent over an impressive effort from the right. It didn’t take long for the home side to level, however, when, after a run from Richie Mullan, a breaking ball fell to Odhran McKeever who shrugged off the attention of Martin O’Brien to point.

A superb driving run from Mark Murphy saw him evade Ciaran Hendry and Conor Kelly before being fouled by Paddy Kelly for a free that John Doyle converted with ease from 20 metres out.

The Oakleafers had their first sight of goal on eight minutes when Brian Óg McGilligan latched on to a deft flick from Cormac O’Doherty, but Robert Fitzgerald closed the gap quickly and made the save.

Mullan sliced over from the left wing to level matters at two apiece before Derry took the lead for the first time off the hurl of Meehaul McGrath.

A lovely Ciaran Hendry strike from wide on the right extended the gap to two before Mullan did brilliantly to get up ahead of Dylan Byrne and spin in behind only for the defender to recover well and get the touch for a ’65 that Cormac O’Doherty slotted.

A second score for McKeever made it 0-6 to 0-2 as Derry started to take control despite playing against the breeze, with Doyle blazing a handy enough looking free wide at the other end.

An O’Doherty free from just inside the 65-metre line before Ryan pinged over a much-needed score for the visitors – their first in 15 minutes – with a free from inside his own half.

Seconds later Ryan was at it again when a soft free was given against McGilligan on the other side of the field, but it was the same result for the wing-back who hit it hard and true. As the game ticked down to half-time it was a tale of the free takers with, O’Doherty knocking over two, while substitute Owen Young and the impressive Brandon Ryan added dead ball scores for Wicklow.

The final scoring act of the half came from the hurl of Ciaran Hendry when, after Derry cleared off their own 13 metre line, the Lavey man found himself as the spare player over down the left and popped it over well to leave the home side ahead by 0-10 to 0-6.

It took Brian Óg McGilligan just nine seconds to get the second half scoring underway as he split the posts from 40 metres, and John Mullan added his name to the list of scorers when he strode down the left side and sliced over from a tight angle.

A McKeever point from midfield had the men in red seven up, and when he was fouled by Bryan Kearney on 43 minutes it provided an easy opportunity for O’Doherty to convert another free – 0-14 to 0-6.

Michael Lynch raised a white flag with his first touch of the ball as his shot from 40 metres was adjudged to have sliced just inside the right post.

Odhran McKeever hit his fourth of the game on 48 minutes before O’Doherty got his first from play, but Wicklow received a lifeline when Eoin McCormack down the left and fired the ball between the legs of Oisin O’Doherty to the net from ten metres out – one that the Slaughtneil goalkeeper won’t want to see again.

They followed it up with a score from John Doyle, but the momentum was short-lived as Brian Óg McGilligan set up Fintan Bradley who arrowed his shot to the bottom right corner of Fitzgerald’s net – 1-17 to 1-7.

A second point for Lynch came before Young added a free. John Mullan then found himself in acres of space and with lots of time to strike his second of the day which was swiftly followed up by Bradley – 1-20 to 1-7.

As the game ticked into added time, Brian Óg McGilligan extended the lead to 14 with Doyle getting the final score of the game with a free.