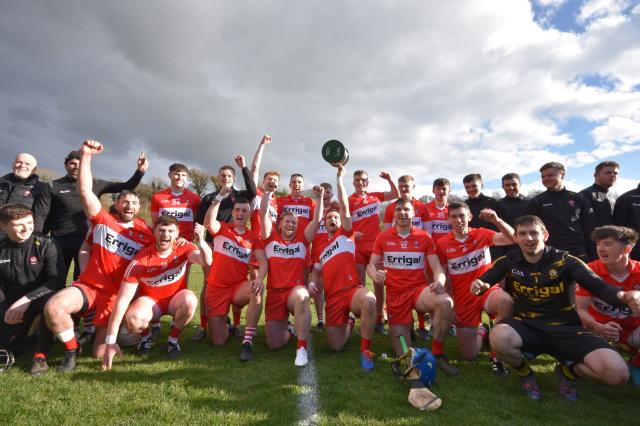 Derry Senior Hurlers crowned 2B champions and promoted to 2A

Derry’s senior hurlers completed the perfect league campaign with a 5 point win over Sligo in Ederney on Saturday to be crowned Division 2B champions and be promoted to 2A for 2023. Congratulations to all the players and management team and all involved!

Derry backed up the strong form they showed in Division 2B of this year’s Allianz Hurling League with yet another devastating performance in this afternoon’s final against Sligo at Ederney in Fermanagh, but it wasn’t until the second half of their contest with the Yeats County that they finally pushed clear to put a bit of daylight between themselves and the upwardly mobile Connacht county, who were looking to break yet more new ground by securing promotion to Division 2A.

16 wides from the Oak Leaf men and two superb saves from Sligo goalkeeper Jimmy Gordon were also a factor in the competitive contest that played out today, a game that was still very much in the balance well into the final quarter.

Odhrán McKeever’s early goal suggested that Derry, who won their five round robin games by an average of a fraction under 13 points per game, might kick on to record yet another comfortable win.

Seven minutes passed before Sligo got off the mark but they soon found a vein of form and scores from Rory McHugh, Andrew Kilcullen and Galway native Rory Hannify left just a point between the sides by the end of the first quarter.

Derry pulled away again with a point from Brian Óg McGilligan and a free from Cormac O’Doherty, but when Niall Feehily’s shot crept into the net coming up to half-time, the game was right back in the melting point.

The third quarter proved decisive as O’Doherty, Fintan Bradley, Gerard Bradley and Odhrán McKeever knocked over a string of points to stretch the lead out to seven by the 50th minute, 1-17 to 1-10.

A superb solo goal from wing-forward Joe McHugh proved to be yet another lifeline for the men in black, but Cormac O’Doherty closed out a mixed day from frees with a run of scores to give Derry a little bit of breathing room by the end.

Sligo were handed a late chance for salvation in the form of a 72nd minute penalty, but Gerard O’Kelly Lynch, who was visibly hampered by his injury throughout the game, fired it over the bar with what was the last score of the game.