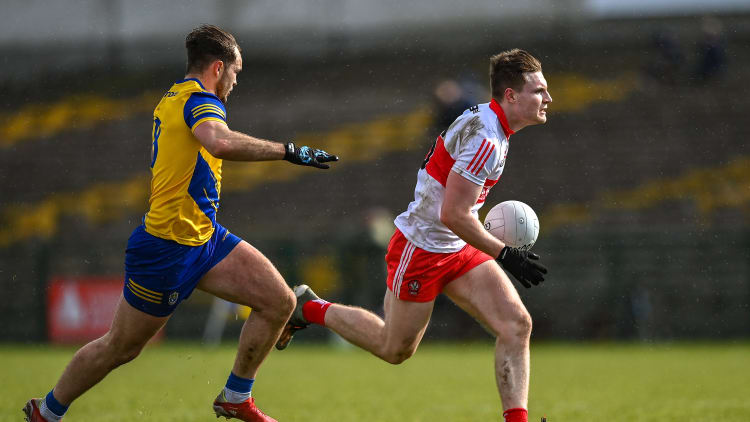 Dramatic draw for Derry in Roscommon

Derry’s Senior footballers remain unbeaten in Division 2 after coming from four points down at half time to secure a draw away to Roscommon.

Report from Kevin Egan at Dr. Hyde Park from GAA.ie

A scrappy and at times fractious encounter ended with Roscommon and Derry right back where they started at Dr. Hyde Park this afternoon. Both sides have home games against Galway to come, and both need to beat the Tribesmen and to pick up at least a draw in their other away fixture to be sure of promotion.

There are of course other permutations if there are surprise results elsewhere in the division, but it’s not too harsh to say that both of these counties will feel that they can produce far more entertaining and stylish football than the disjointed fare supporters were treated to at the Hyde today.

With the breeze blowing into their faces, Derry looked to drop deep and strike on the counter attack in the first half, though they only really succeeded on one of those two counts, at least after the first ten minutes.

Roscommon enjoyed plenty of early possession but failed to make it count and feel behind to two early scores from Shane McGuigan, once Richard Hughes won a free that Donie Smith converted in the first ten minutes, they settled into their work and looked the more threatening side.

Smith, Conor Cox, Eddie Nolan, Enda Smith and Niall Daly all kicked excellent points from distance while at the other end of the field, Brian Stack was very strong in his man on man battle with McGuigan, and Roscommon were able to bottle up the relatively small scoring area.

Several efforts on goal from the away side either dropped short or were pushed wide into the breeze, so even though Roscommon’s 0-8 to 0-4 interval lead drew a satisfied round of applause from the home supporters as the two teams went into the dressing rooms, it still felt like the meat of the story of this game was yet to unfold.

Sublime early points from Cathal Heneghan and Cian McKeon after half-time changed the complexion of the game considerably as it gave the Rossies a much bigger lead to defend and also demonstrated their potency when playing into the breeze, and while Pádraig McGrogan got Derry off the mark immediately afterwards, there was no sense that a comeback was imminent.

A black card for McKeon – one of 17 cards of various colours issued by referee Seán Lonergan on the day – opened the door for Derry a little bit, but arguably the most contentious call of the afternoon was to follow when Eddie Nolan found Heneghan with a well-measured pass and NUIG’s Sigerson Cup hero turned his man and looked to be clean through on goal, only for play to be called back for a pull on the jersey on his way in.

Still, Conor Cox’s tap over free moved the lead back out to six, and there was no indication of how completely dominant Derry were set to become.

Paul Cassidy and McGuigan fired two points in quick succession to both reduce the gap and shift the momentum of the contest, but after that it was a case of wearing down the home side with constant, relentless pressure. The card count mounted, the free count mounted, Roscommon failed to test the keeper with another couple of half-goal chances, and when a superb sidestep and finish from Brendan Rogers drew the sides level with over ten minutes of normal time to play, it looked like there was only going to be one winner.

Sure enough the Oak Leaf men took the lead through another McGuigan free, with Niall Daly getting a second yellow card for the foul, but Roscommon produced one last sustained attack and it fell to Keith Doyle to be their unlikely hero, as their 2021 U-20 midfielder kicked his first ever senior point for the county from 30 metres out to tie up the game.

There was still time for more controversy and drama as Brian Stack was black-carded and Shane McGuigan received a second yellow for an altercation, and with McGuigan off the field, it fell to midfielder Emmet Bradley to take on the last scoring chance of the match, a 45 metre free that he pushed narrowly wide of the posts.