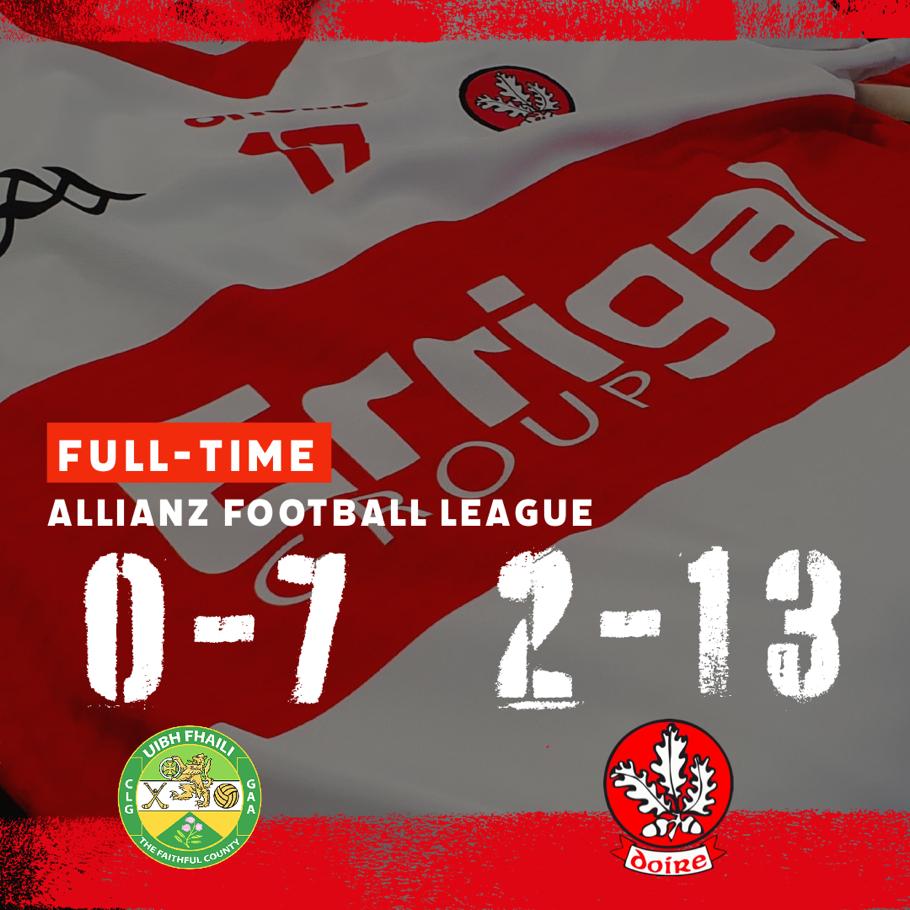 Two from two for Senior footballers with win away to Offaly

Derry cruised to their second win of the league in Tullamore as they swept aside Offaly on a day when the conditions dictated the quality of the game.

A Niall Loughlin goal right on the stroke of half time proved a real blow for Offaly as instead of going in seven points down at half time having played against the wind, they were now staring down the barrel of a 10 point deficit.

Shane McGuigan was on top form for the winners with 1-6 while the Glen contingent, headed up by Conor Glass and Ciaran McFaul also stood out for Rory Gallagher’s men.

It’s back to back defeats for John Maughan and Offaly and the tasks aren’t getting much easier for them with Galway in Salthill next up for them in two weeks time.

Derry had the aid of the strong wind blowing straight down the field in Tullamore in the opening half and while they had plenty of early possession, they could only muster up a 0-2 to 0-0 lead by the sixth minute with Shane McGuigan curling over two frees.

Offaly opened their account in the eighth minute when corner back Declan Hogan cut in along the end line and chose to fist over the bar from a tight angle.

The strong wind was severely impacting the Offaly men and more often than not, struggled to even get the ball out of their own half from the kickout.

Derry opened up a 0-6 to 0-1 lead by the 23rd minute with the pick of those scores from Lachlan Murray and a corker from distance by full back Brendan Rogers.

Offaly ended a 22 minute scoreless run five minutes before the break with keeper Paddy Dunican converting a free but they lived dangerously moments before and were lucky that Shane McGuigan didn’t find the net from close range.

Points from Ciaran McFaul and two from McGuigan, the second a super curling effort with the left foot, left Derry 0-9 to 0-2 in front but with almost the last kick of the half, Ciaran McFaul dropped an effort short into the hands of Offaly keeper Paddy Dunican.

Dunican looked in control of it but Niall Loughlin came in to challenge him, the ball dropped and Loughlin poked home from close range to leave it 1-9 to 0-2 at half time.

Seven second half minutes elapsed before the opening score of the second half with Offaly midfielder Bill Carroll kicking third third score of the day but the 10 point margin was restored minutes later with Shane McGuigan swinging over a free.

Derry had more intent than the home side for their period playing against the elements but the Faithful County did narrow the gap slightly with two super scores in the space of minute from Bill Carroll and Dylan Hyland to leave it 1-11 to 0-5 with 18 minutes to play.

Padraig McGrogan and Niall Loughlin extended the Derry lead to 11 points with five minutes to go but Dylan Hyland did kick a late brace for the Offaly men coming near the death.

Derry finished the job off in style in injury time with Shane McGuigan clipping the ball into an empty net as they left Tullamore with another two points and a 12 point win.