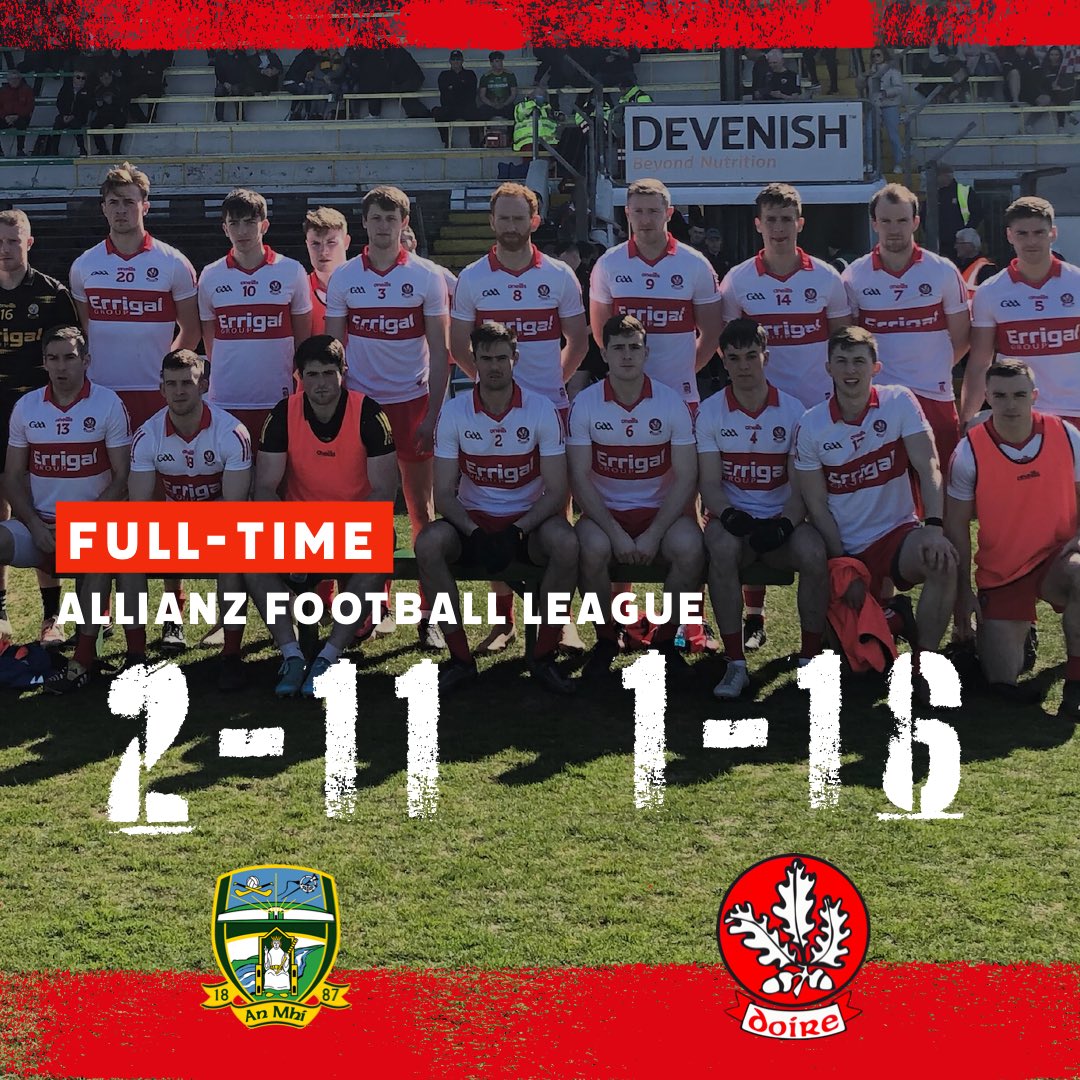 Derry’s Senior Footballers produced a late comeback in Navan to secure a two point victory over Meath in the final Allianz League game of 2022; but with Roscommon beating a weakened Galway team already promoted to Division 1 following victory over Derry last week; Derry missed out on promotion by a single league point (Galway and Roscommon ending on 12 points each and will play each other in the league final next weekend, and Derry on 11 points) and will have to make do with being the only Ulster team in Division 2 for 2023, where they will be joined by four Leinster teams: Dublin, Kildare (both relegated from Division 1), Louth (promoted from Division 3) and Meath; and three Munster teams, Clare, Cork and Limerick (promoted from Division 3) .

While the league action may be over, the Senior Footballers now have just over a month to prepare for an Ulster Championship Quarter-Final on the 1st of May against the winners of the preliminary round game between Fermanagh and reigning All-Ireland champions Tyrone, which is scheduled for the 16th April.

A third place finish in Division 2 also should guarantee Derry a place in the top tier Sam Maguire All-Ireland Championship regardless of reaching the Ulster Final; with 2022 seeing the provincial finalists and next 8 top teams based on league position in the top tier; and the remaining teams in the new Tailteann Cup.

Report below by Paul Keane at Páirc Tailteann – from GAA.ie

A late burst of scoring, including a goal from top scorer Niall Loughlin, secured victory for Derry in Navan but they will ultimately remain in Division Two of the Allianz NFL for another season.

Derry needed to beat Meath first of all at Pairc Tailteann and then for Roscommon to slip up against Galway though with the Rossies in control all afternoon against Galway, it was clear that returning to Division 1 for the first time in seven years was an unlikely outcome.

Still, Derry could only take care of their own business and they duly delivered a fifth win of the campaign, even if it looked unlikely to materialise when they trailed by five points with an hour played.

Derry came good in the closing minutes and reeled off an unanswered 1-4, the goal coming from top scorer Niall Loughlin, between the 60th and 70th minutes.

In any other year, 11 points may have been good enough to secure promotion but their Round 5 draw with Roscommon probably cost them overall.

They will still look to the Championship with optimism and will take on Fermanagh or Tyrone on May 1 in a provincial quarter-final while Meath will meet Laois or Wicklow at the same stage in Leinster on the same afternoon.

Loughlin was Derry’s key man, scoring 1-4 overall and the 65th minute goal that swung the contest while the returning Shane McGuigan struck an impressive 0-6.

The pressure was on Derry to perform given the possibility of promotion and they delivered initially, playing to a high standard and benefiting from McGuigan’s return at full-forward.

The Slaughtneil man was suspended for the heavy defeat to Galway in Round 6 but, having previously scored 1-27 in the campaign, picked up where he left off with a brilliant opening quarter.

He scored three points as Derry opened up a fully deserved 0-7 to 0-3 lead after 18 minutes.

Derry’s midfield, powered by ex-AFL player Conor Glass and Emmett Bradley, was entirely on top, resulting in a series of chances which McGuigan and the influential Loughlin happily capitalised on.

McGuigan was picked up by stand-in Meath captain Conor McGill and the experienced defender fouled his man for a 13th minute Derry penalty after a flowing move from defence through to attack.

McGuigan stepped up to the kick but was foiled by goalkeeper Harry Hogan, a wasted opportunity that appeared to hit Derry hard.

Meath took over in the second quarter and with their own midfield of Bryan Menton and Ronan Jones coming strongly into the contest, they enjoyed a greater share of possession.

Both players got on the scoresheet for Meath who outscored Derry by 1-4 to no score from the 20th minute until half-time.

Jack O’Connor struck the Meath goal in the 21st minute after being set free by the excellent Donal Keogan who typically got through a tonne of work.

Matthew Costello had a similar opportunity for Meath but surprisingly opted to fist over a point with the goal at his mercy.

Joey Wallace had a goal chance saved too as Meath turned the screw and hit the interval with a 1-7 to 0-7 lead.

Both sides traded scores throughout the third quarter and when Shane Walsh converted Meath’s second goal from a 50th minute penalty, following Shea Downey’s foul on Menton, it put the Royals four points clear and in a strong position.

Andy McEntee’s side would stretch that gap to five points after 60 minutes thanks to scores from Thomas O’Reilly and goalkeeper Hogan.

But when the need was greatest Derry delivered, reeling off that 1-4 to win the game in impressive fashion.

Loughlin played a neat one-two with McGuigan for his goal and Glass struck at the death for the insurance point which sealed the two-point win.