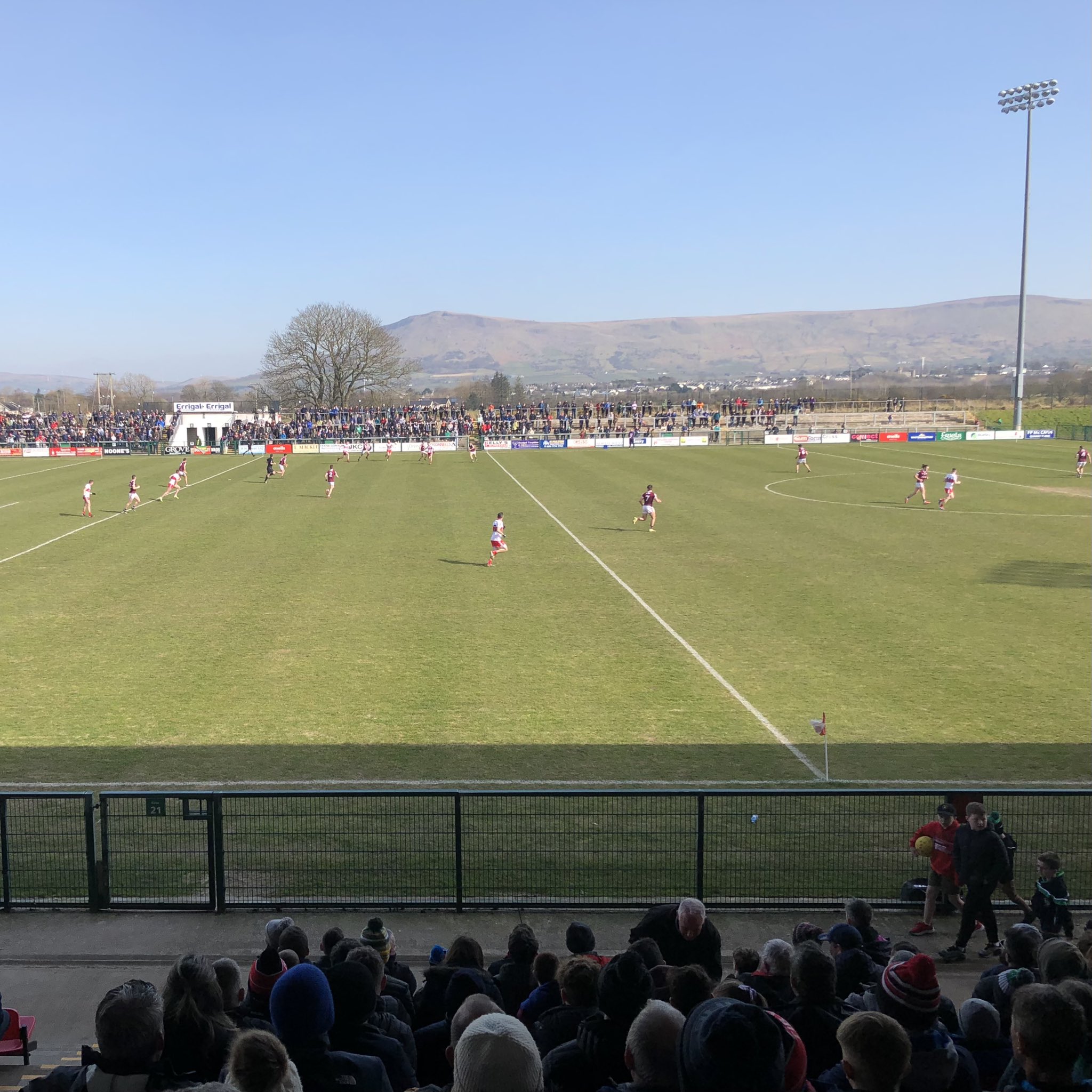 A very strong first half from Galway at Owenbeg meant there was no way back for Derry’s senior footballers, resulting in a first defeat in league football in 13 games, and meaning our promotion chances to Division One are no longer in our own hands, with a win over Meath required along with a defeat for Roscommon in the last round next weekend.

By Orla Bannon at Owenbeg from Gaa.ie

Galway secured instant promotion back to the top flight after a sixth straight win in Division Two of the Allianz Football League.

Their four-goal demolition of Derry in Owenbeg was a huge setback to the Oak Leafers own promotion hopes.

Derry had not leaked a goal in Division Two before this game, and had the tightest defence in the division conceding just 0-42.

However they shipped over half of that tally, 4-11, in this one game on a day when nothing went right.

Matthew Tierney, Damien Comer and Dessie Conneely hit first-half goals as Galway led 3-8 to 0-4 at the break before sub Tomo Culhane hit a fourth Galway goal for Padraic Joyce’s team in the second half.

Galway played for seven minutes of the second half with 13 players when former Antrim player Owen Gallagher was black-carded.

Derry finished the game with 13 players with Ciaran McFaul’s late black card following an earlier yellow, meaning he too was dismissed.

Roscommon’s win over Offaly sees Derry drop out of the automatic promotion spots, which they have occupied all season.

Rory Gallagher’s side take on Meath in Navan in their final group game next week, needing Galway to do them a favour against Roscommon.

All Derry’s defensive lapses came at once and they were ruthlessly exposed by a Galway side that was patient in possession and boasted an attack that had real teeth.

Derry won the toss and elected to play against the wind in the first half with Galway ripping into them from the start.

Manager Padraig Joyce afterwards described their first half display as their best this season with Matthew Tierney palming home the opening goal at the back post after 10 minutes after forcing a turnover.

Damien Comer, who later limped off with a hamstring injury, drove home a fierce second goal in the 22nd minute after Paul Kelly’s initial shot was blocked.

It already looked like damage limitation at that stage for Derry, who were hit with another sucker-punch before half time when a poor kickout was finished low to the net by Conneely.

Derry only scored two points from play in the first half.

Galway’s fourth goal was another on the counter-attack with sub Culhane having an easy tap-in finish.

Ciaran McFaul hit 0-3 from play in the second half becoming very scrappy.

Conroy was sent-off in the 58th minute after contesting a kickout in the air against Oisin McWilliams. McKinless followed soon after on a very disappointing day for the home side.