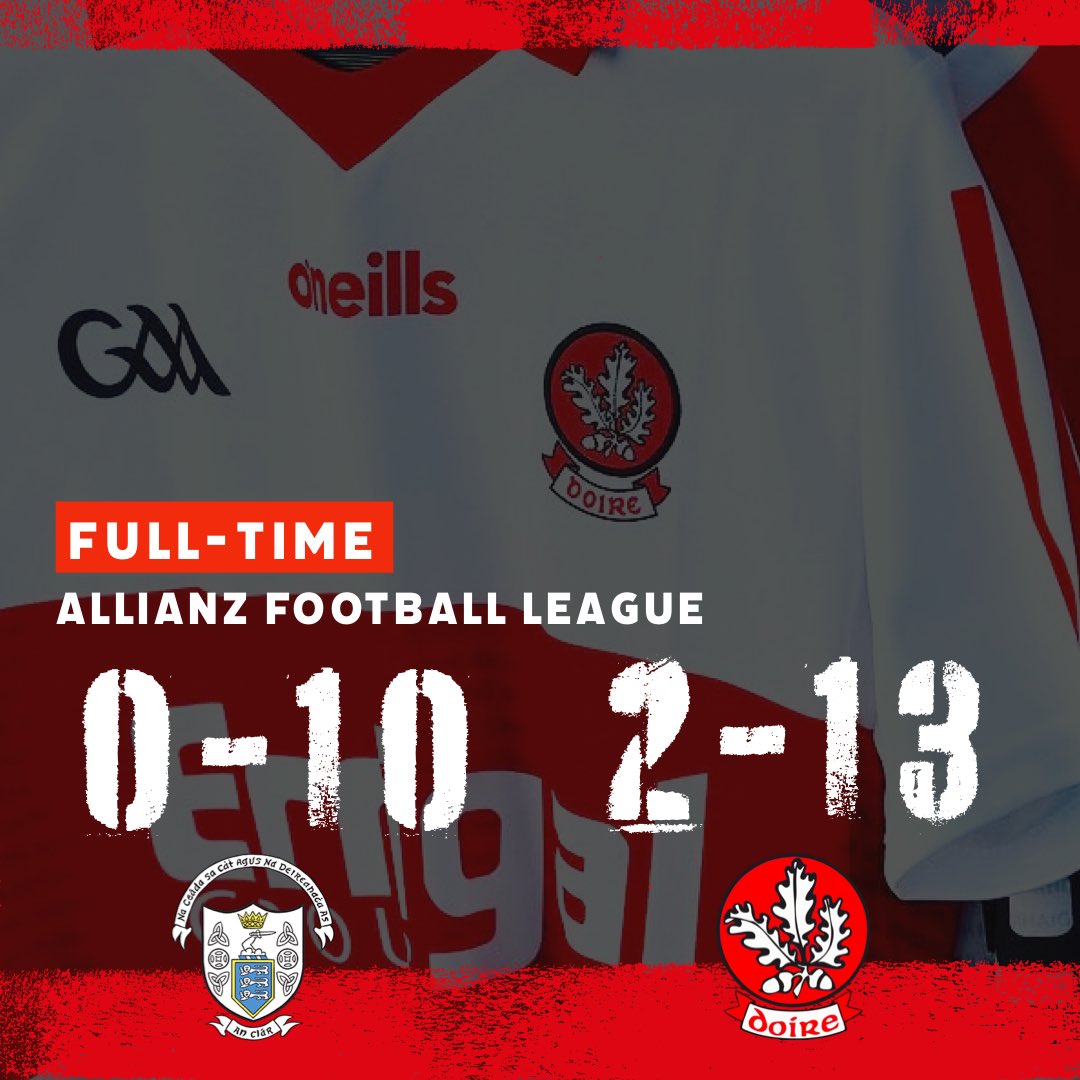 Derry Senior footballers have now made it eleven consecutive wins in league action over three seasons; keeping them top of Division 2; with three games remaining.

The win also means that both our Senior Hurlers and Footballers have started 2022 unbeaten in league action with a combined total of seven wins between them.

Having defeated Cork last time out at Owenbeg, it was Derry’s turn to travel to another Munster side, when they made their way to Ennis to face Clare yesterday.

By Páraic McMahon at Cusack Park, Ennis from GAA.ie

Promotion from Division 3 was sealed by Derry last year and now Rory Gallagher’s men appear on course to advance to the top tier of the NFL after picking up their fourth win in a row, this time proving too strong for Clare in Ennis on Sunday.

Superior in most if not all areas of the field, Derry really exploited Clare from Stephen Ryan’s kickouts with their second half goals from Benny Heron and Gareth McKinless arising from Banner restarts. Clare’s failings in this sector was in complete contrast to their round three draw with Roscommon where they bossed their counterparts.

A total of 11 players registered scores for the winners over the course of 70 plus minutes in contrast to Clare’s six. Derry picked off the bulk of their scores from Clare kickouts in the second half and by exploiting gaps in the Banner defence for the opening period.

Only a point separated the sides at half-time, late scores from Keelan Sexton and Eoin Cleary left Clare firmly in the mix at the break, a couple of missed chances hindered them from getting to level terms.

They did manage to level matters for the only time in the game when Darren O’Neill split the posts on thirty six minutes, only for Derry to reply notching 1-01 without reply. They also amassed a tally of 1-04 on the bounce around the third quarter mark to effectively wrap up proceedings.

Rory Gallagher’s side never let up and continued to keep the Christy Ryan operated scoreboard ticking from here, Emmett Bradley, Ethan Doherty and Ciaran McFaul among those raising white flags.

For the winners, Bradley, Padraig McGrogan, Brendan Rogers, Shane McGuigan and Paul Cassidy were impressive. With three rounds left to play, they are well positioned in their efforts to nab one of the coveted promotion spots and based on their display, it will take a very strong team to stop them.

Colm Collins’ Clare will be disappointed following their first league defeat of 2022. The strong aspects of their play such as winning the aerial ball and moving the ball quickly through the lines were not as apparent in this contest and the fear for them is that this loss could have scuppered their chance for promotion.