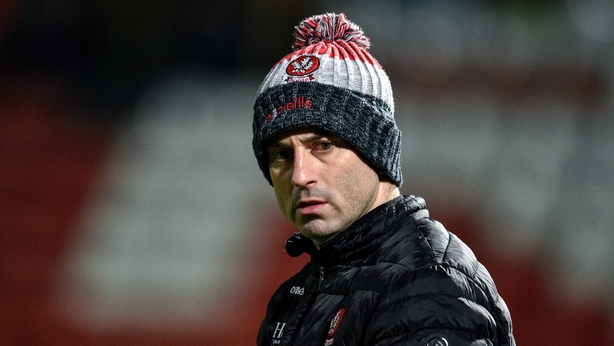 Tipperary had to play with 12 men at one stage against Derry and limped their way to a 0-10 to 0-6 defeat at Celtic Park.

It was Derry’s first win of League this year, after they took a 0-4 to 0-3 lead into half-time in a slugfest.

Tipperary had a dreadful second half with Steven O’Brien and Daire Brennan both red carded, while John Meagher and Alan Campbell were shown black.

Derry went through the gears and worked their way to a five-point win with the prolific Shane McGuigan accounting for 0-7.

Ciaran McFaul was the hero for Derry who fought back to secure a 2-11 to 1-14 draw at the death against Leitrim in the Division 3 opener at Celtic Park.

These sides were promoted last season, with the Ulster outfit winning both games, including the Division 4 decider at Croke Park.

Leitrim had also suffered a 30-point hammering at the hands of Roscommon recently, but when Keith Beirne landed a 66th minute free they were in position for a shock win. Ben McCarron and McFaul combined to score two late points and earn a share of the spoils.

Derry were 1-8 to 1-7 ahead at half-time after Emmett Bradley cancelled out Cillian McGloin’s goal. Shane McGuigan fired a second Derry effort in the 46th minute but Beirne pushed Leitrim back in front only to be thwarted.

Down went top of Division Three in the National Football League on Saturday evening while Paul Galvin claimed his first competitive victory as Wexford manager in Division Four.

Both Derry and Down drew their opening games, and this time around it was a straight shootout between Donal O’Hare and Shane McGuigan at Páirc Esler in Newry. The Down forward was eclipsed by his Derry counterpart but came out on the winning side, on a 0-14 to 0-12 scoreline.

O’Hare (0-3) and McGuigan (0-4) dominated proceedings in the first half and it was Derry who took a narrow 0-8 to 0-7 lead into the break. McGuigan scored inside the opening minute only for Jerome Johnston to equalise moments later.

Derry took their most decisive lead in the 26th minute when Alex Doherty scored, but O’Hare and Cory Quinn quickly replied. O’Hare rounded off the first half scoring and Down were still right in the game.

McGuigan scored first after half-time but Down never gave up, and were level when O’Hare scored 12 minutes into the second half.

McGuigan and O’Hare traded points but Barry O’Hagan put Down in front with four minutes of normal time remaining and they held on at the death.