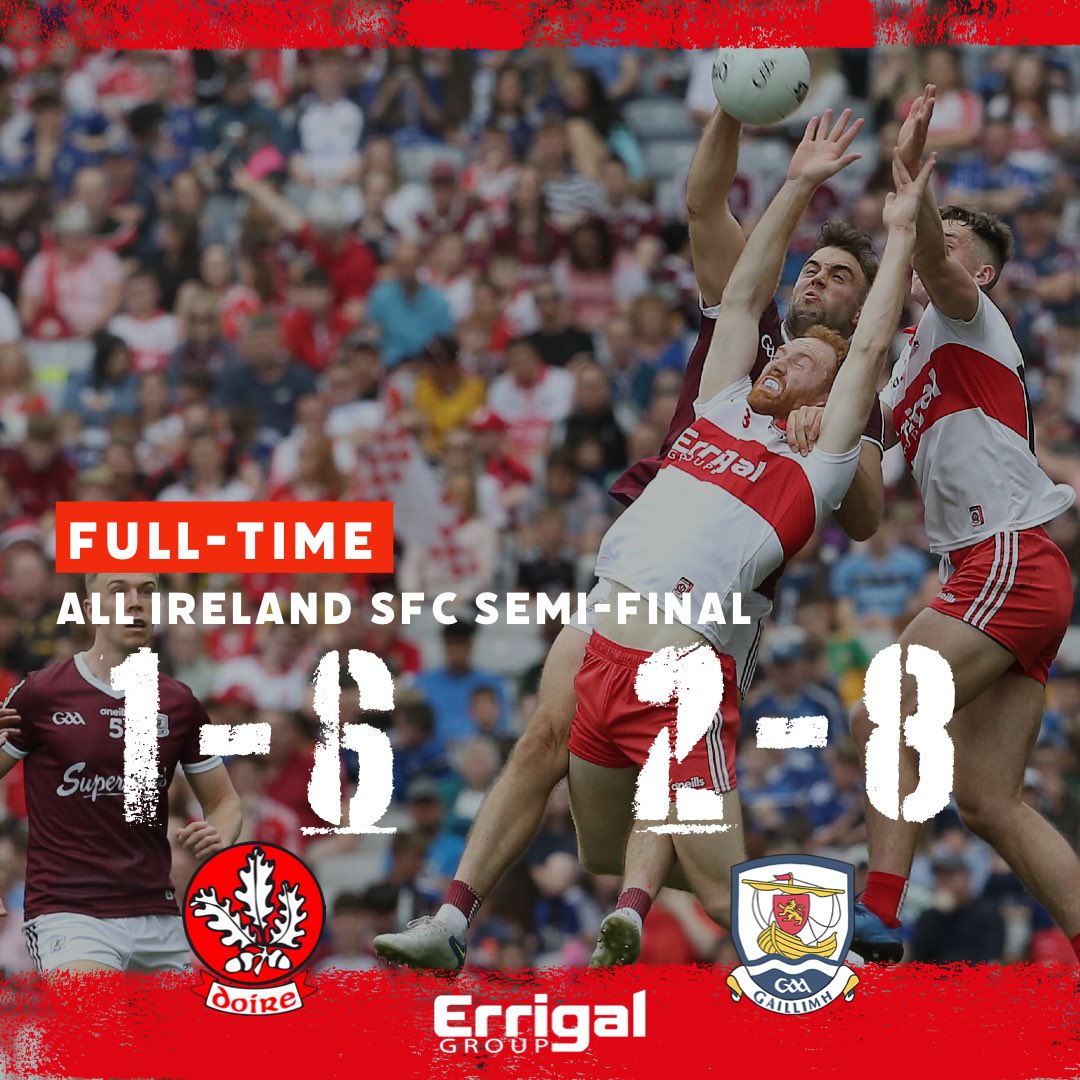 Derry’s Senior footballers’ brilliant championship run in the summer of 2022, that encompassed a first Ulster Championship since 1998, finally came to an end at the hands of Galway in the All-Ireland semi-final in Croke Park on Saturday 9th July.

Despite taking an early lead in the first half; when Galway levelled at the break, Derry were unable to get ahead again for the remainder of the game; though they never gave up, fighting to the end and getting a late goal through Lachlan Murray to close the gap.

However it wasn’t to be and it is Galway who advance to compete for Sam Maguire against Kerry in two weeks time in the All-Ireland Final.

Thank you to our senior footballers for all they have given us in 2022.

You made our families, clubs and county proud.

You provided positive reasons for us all to be together.

You renewed our sense of purpose and belonging.

You created excitement, energy and enthusiasm most evident in our schools and young people.

You provided us with reasons for quality time together that maybe we were guilty of taking for granted before Covid.

Families repeated routines and traditions that maybe they did with loved ones who are sadly no longer with us.

That was only possible because of you, the players, management and support team.

In the words of our captain, Chrissy McKaigue:

This is only the start.
Thank you.
#WeAreDerry.

Below report from GAA.ie – By Cian O’Connell at Croke Park

A first All Ireland final since 2001 beckons for Pádraic Joyce’s team, who shrugged off Derry’s resistance on a sultry evening in the capital.

In the dying embers of this battle at GAA headquarters, Comer was withdrawn to rapturous applause.

It was a stirring moment for the maroon and white with Comer spearheading this victory.

At the opposite end of the pitch captain Seán Kelly contributed another wholehearted display, while John Daly’s excellence was another key factor.

Initially Galway had encountered some difficulty failing to land any scores from their first five shots.

During that spell Rory Gallagher’s Derry registered three points with Brendan Rogers nailing two either side of a Niall Loughlin effort.

Inevitably Comer was the Galway player to respond mining a 22nd minute point and by the time the interval rolled around the teams were level at 0-4 each.

Hawk-Eye had ruled a Shane Walsh 45 on the cusp of half-time was wide, but the officials awarded a score ensuring the issue was delicately poised.

Galway, though, then struck 1-3 without reply which was a significant flurry in such a tight game.

Walsh converted three frees on the spin before Comer made the Derry net dance with a 46th minute major.

Suddenly Derry were under severe duress, but Galway forced turnovers and restricted the Ulster standard bearers.

Shane McGuigan’s pointed free terminated a 14 minute search for a second half Derry score, but Galway summoned a reply.

Johnny Heaney fisted over a point and then Comer sealed the deal with a 68th minute goal.

The Annaghdown attacker subsequently supplied an opportunistic finish and Galway’s final passage had been secured.

Joyce, so influential as a prolific forward in 1998 and 2001, has guided Galway to a national decider.