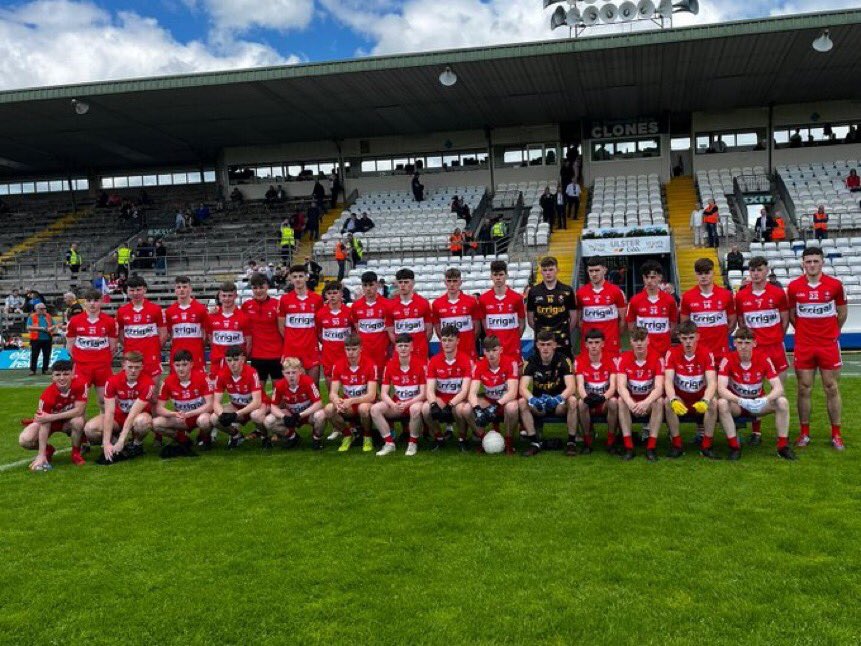 Following the disappointment of the Ulster Final defeat, Derry’s minors regrouped for their All-Ireland Quarter final against Munster champions Cork.

Despite always being in control, Derry only led by three at half time, but a strong second have performance saw them advance to the All-Ireland semi-final against Galway, scheduled for the weekend of the 25th/26th June.

Report below By Michael Wilson in the Derry Journal

Derry minors will meet Dublin or Galway in the All Ireland semi-final after completely dominating Munster champions, Cork, in a 0-12 to 0-06 victory in O’Moore Park, Portlaoise on Saturday evening.

The Oak Leafers were in charge from start to finish of a decidedly one sided contest in which Cork never got to grips with Derry’s strong running game and ability to rotate their inside line. Danny McDermott was superb throughout for Martin Boyle’s young side but all around him, Derry players stood up to be counted after their recent Ulster final setback.

Leading by three at half-time, Derry had left a few opportunities behind them but Cork never looked like making them pay as Ruairi Forbes’ superb point after winning the second half throw-in set the tone for another 30 minutes of Oak Leaf dominance. Cork did raise a bit of a gallop with three successive scores in the final four minutes of normal time but given they were chasing an eight point Derry lead, the contest was long over.

The main question mark hanging over Martin Boyle’s talented young Oak Leaf squad was how they would react to the disappointment of that recent Ulster final defeat to Tyrone in Clones, a game after which the Oak Leaf boss admitted they had under-performed at times.

Yet this panel is nothing if not resilient and it was obvious within minutes of the throw-in that Derry were hell bent on using their provincial pain to fuel an assault on the All Ireland crown. Facing up to a highly fancied Cork side who had emphatically accounted for Kerry in the Munster final, Derry’s opening half was controlled in attack and intense in defence, limiting the Rebels to six shots and only two points in the opening 30 minutes. If anything, Derry’s frustration was that they weren’t further ahead than the 0-5 to 0-2 lead they eventually turned around with.

Two wides wasn’t overly wasteful but Derry did pass up a couple of clear shooting opportunities while twice the pitch appeared to open up for goal chances Derry were unable to capitalise on.

With James Murray detailed on Cork dangerman Olan O’Donovan, Derry started full of energy, engineering a 0-3 to no score lead inside 10 minutes and they never looked back with McDermott and Ciaran Chambers both excelling.

A foul on Johnny McGuckian allowed Conall Higgins to get the scoreboard ticking with the opening score via a third minute free and within five minutes Chambers and Odhran Crozier, the latter via a lovely ’45’, had Derry three points up.

Olan O’Donovan eventually got Cork’s opening score with 11 minutes on the clock but the Rebels were making little inroads against a Derry defence that looked to have learned the lessons of Clones.

A superb Odhran Murphy point, coming round on the loop to split the posts, reinstated Derry’s three point advantage and while Cork captain Colm Gillespie did hit a second score, Chambers’ second of the half left it 0-5 to 0-2 with Derry in cruise control.

Derry will have been expecting a response from the Rebels but even before Cork could get themselves going in the second period Forbes had won the throw-in, surged forward and split the posts for an inspirational score.

Chambers increased the lead from a free before Crozier again showed his own prowess from a placed ball by striking a lovely 45m free to put Derry 0-8 to 0-2 up and Derry had one foot in the semi-final.

Bryan Hayes’ brilliant point was Cork’s first score for 18 minutes either side of half-time but it proved merely a footnote as Eoin Higgins and a lovely solo effort from Cahair Spiers took Derry’s lead to 0-10 t0 0-03 by the midway point of the second half.

From there, it was game management and Derry never looked in trouble. Another Eoin Higgins free put them eight points up with five to go and while Cork rallied somewhat with three scores, Derry were never in danger. Shea Birt’s late point sealed the victory which will go someway to erasing the memory or the Ulster Final. This young Derry team had proved their character. The talent was never in doubt but they are up and running again and you wouldn’t back against them.