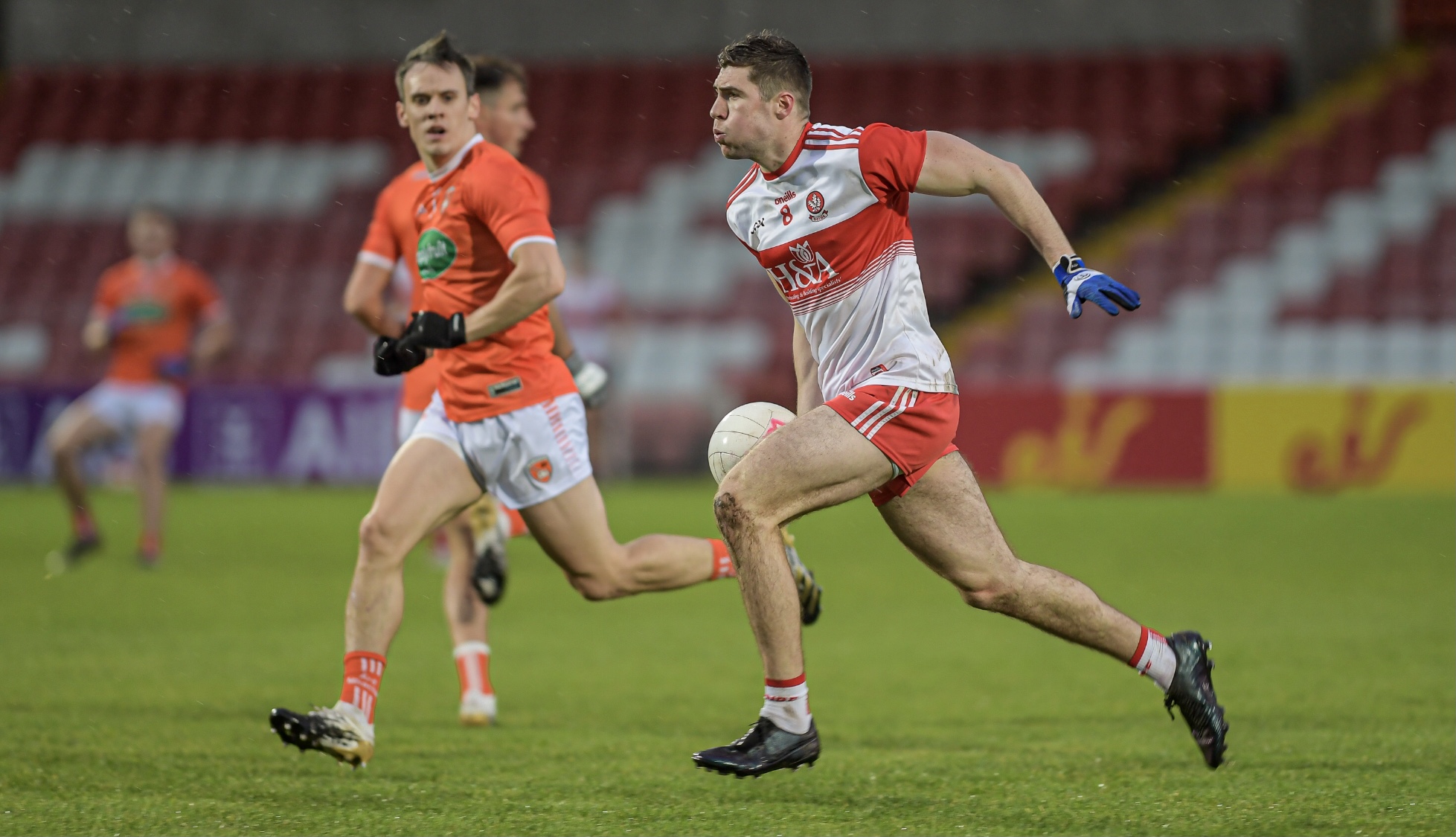 Derry’s 2020 Ulster SFC campaign is over following a two-point quarter-final loss to Armagh at a wet Celtic Park on Sunday evening.

The Orchard men led from start to finish but were forced to dig deep as the Oakleafers staged a creditable fight-back which fell just short. Free-taker Rian O’Neill, with four points, top scored for the winners, while Shane McGuigan notched up seven frees for Derry.

Promotion to the top table in Division brought Armagh to Celtic Park as favourites to defeat a Derry team unable to drag themselves out of Division Three this year. Both blue chips sides have been strangers to lifting the Anglo Celt Cup in recent times. Armagh must look back twelve long years to their last provincial title, while Derry’s agony stretches back a generation ago to 1998.

A weekend squall of wind threw buckets of rain to all parts of the pitch, but Armagh settled best on the slick surface. The visitors were full value for their six point lead at half-time, running in 0-11 to 0-5 ahead. Rory Gallagher stationed Niall Loughlin and the returning Emmett Bradley as their inside forward line, but Derry struggled to find them or indeed to find their groove.

Armagh, in contrast, found space despite a heavily manned Oakleaf defensive barricade. And they were clinical with their shooting. Midfielder Oisin O’Neill and Jamie Clarke both hit two from play while free-taker Rory Grugan helped himself to three first half points.

For the home side, captain Chrissy McKaigue opened their account early on, but despite just edging possession and territory they struggled to create many clear chances.

Ciaran McFaul continually carried the ball and the fight to their opponents but frees from Shane McGuigan and Niall Loughlin was all Derry had to show at the break.

With the breeze at their back the home side enjoyed the better restart, with McGuigan and Loughlin both scoring from distance to see Derry trail 0-13 to 0-11 by the second water break.

But as the floodlights came on and the night darkened the contest bubbled up to simmering point.

Armagh lost the influential Jamie Clarke to a 51st minute black card as Derry sniffed the chance of an upset. Niall Loughlin and Shane McGuigan converted a number of frees but Rory Gallagher’s side were unable to work the goal chance they badly needed in injury time.