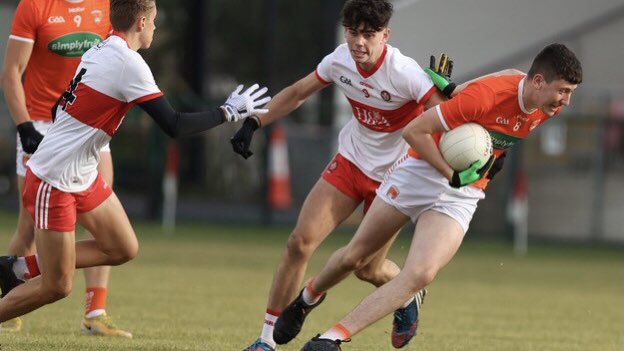 Derry’s minors footballers were knocked out of the 2021 Ulster MFC at the quarter-final stage following a late defeat to Armagh on Wednesday night.

Derry had the best of the proceedings for long parts of the contest at Owenbeg, with corner-forward Niall O’Donnell and wing-back Jack McGroarty impressing in the opening period. Both players dhot two points apiece before the break as the Oak Leafers took a three-point advantage into the interval (0-8 to 0-5).

Ryan McNicholl shot his second point of the game to increase Derry’s advantage to five points early in the second-half, but Armagh suddenly came to life. Playing with the wind they ate into the deficit and with just three minutes left of normal time the sides were locked at 0-10 apiece.

Derry continued to battle strongly against the Orchard attack, but were ultimately undone by Callum O’Neill’s injury-time winner from the right wing, which edged Armagh into a 0-12 to 0-11 lead and proved to be the final score of the game.