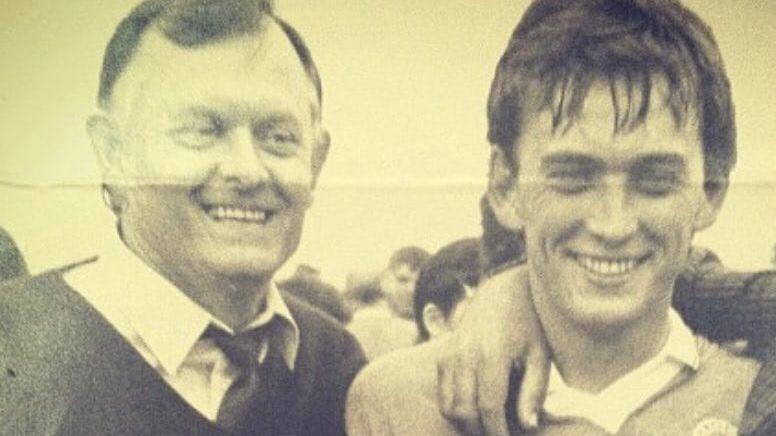 “How was school today, Fiona?”

Those words were written and recounted in a poem by the 12-year-old Fiona Smyth at the funeral of her Bellaghy neighbour, 61-year-old Sean Brown. It was May 1997, 25 years ago.

Sean Brown’s kindness, selflessness and humanity left a lasting impression not only in the mind of a child, but of an entire community.

Born in a small labourer’s house two miles outside of the village of Bellaghy, Sean Brown’s upbringing was common to many of the time. Hard work with little material reward, the company of neighbours, the GAA, cutting turf, and long walks to school with one eye on the future. It was real-life Heaney Country.

“I have known two generations of the Brown family,” wrote Seamus Heaney, a childhood friend of Sean Brown. “They are people of great probity, much respected in the Bellaghy district.”

In an article with The Independent shortly after his murder, Seamus Brown, Sean’s brother, alongside Chris and Joe, recalled their formative years together: “He was always the one to stop fights, and stopped me going with the others to pinch apples from the orchard. He was the eldest, and had a sense of responsibility.”

The English word ‘community’, is derived from the Latin, ‘communitas’, meaning ‘public spirit’.

Sean Brown was the living embodiment of public spirit.

His impact on his local community stretched far beyond Gaelic Games, as he was also at the heart of parish projects, schools and other sports clubs. But it was Wolfe Tones Bellaghy where his heart lay.

Brown’s generation blazed a trail for Bellaghy and Derry. Their staggering success is typified by the feats of his cousin, the late Tom Scullion, holder of 12 Derry SFC medals and an All-Ireland club medal in 1972.

In 1997, Scullion recalled how Sean Brown had no boundaries between his various voluntary roles and had acted as the local rep of the Credit Union. “He drew in lots of the younger lads who were keen on buying cars,” said Scullion. “He would advise them on saving and borrowing strategies. He saw it as part of keeping them on the strait and narrow.”

Sean Brown was always working for others, a theme echoed 25 years later by the captain of the all-conquering Bellaghy team of 1972, Laurence Diamond.

“Sean was my neighbour on Castle Street. He lived directly opposite,” explained Diamond. “Sean’s other neighbour was Sam Overend and he looked out for Sam the same as me or any other neighbour. He lived his entire life looking out for others.”

A passionate cyclist who did a 30-mile round trip to Ballymena every day, Brown’s love and concern for his neighbours led to the formation of an exclusive cycling club.

“Sean Brown was full of fun. He was a great cyclist,” said Diamond. “He had done marathon cycles to Dublin many times and would take us all out on Saturday mornings in a group. There was me, Dr Ben Glancy, big Tommy Doherty and a few others. Sean would say, ‘You men are at an age where your fitness is gone and we need to do something about that.’ It was brilliant. He fixed our bikes, mended punctures for us and was the driving force behind what he called Ballyscullion’s Big Pedal Club.

Clearly revered by his peers, Brown emerged to demonstrate his sense of responsibility time after time; raising funds and clearing debts, planning for the future. He was the club’s quizmaster and a fizzy orange drinking tee-total barman. A talented engineer and later a teacher and mentor in the apprentice training centre in Ballymena, Sean Brown could also turn his hand to the mechanics of cars. Or indeed any form of transport. “I had collected a part for the van off him that same evening,” notes his friend and Bellaghy clubman, Tommy Donnelly, before tailing off.

“I could talk all day about him,” says Laurence Diamond.

No account of Sean Brown the man will ever be complete but it doesn’t stop Diamond from trying.

“Above all Sean Brown was a great human being. He is such a loss.”

Today, Sean Brown Park stands proudly in the centre of Bellaghy, a ground and facility he was instrumental in building and that was renamed following his death. Above all, it’s perhaps the example of Sean Brown that will endure; a father, grandfather, community leader, engineer, founder of Ballyscullion Big Pedal Club and a kind neighbour and friend who gives us all hope, something Seamus Heaney defines as:

“Hope is not optimism, which expects things to turn out well, but something rooted in the conviction that there is good worth working for.”

In his beloved Bellaghy, Sean Brown will forever be remembered as the faithful servant who spent his entire life working towards that good.