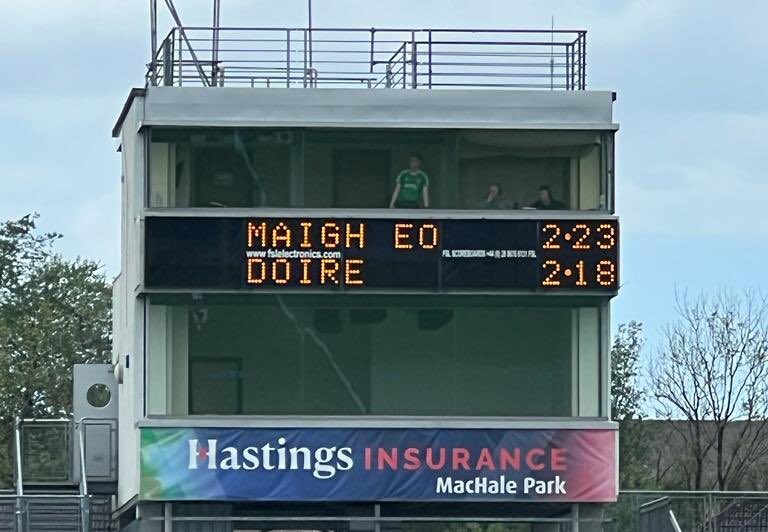 Derry Senior Hurlers travelled to Castlebar on Saturday 14th May for the final round game of the Christy Ring Cup against Mayo, level on points with their hosts, knowing the winner of the game would gain the right to face Kildare in the final next weekend.

Despite trailing by 4 at the break, and 6 mid way through the second half Derry brought the difference down to just one shortly before the end of normal time; only for Mayo to pull away again in the final minutes.

Defeat sees Derry’s Senior hurling season come to an end, after gaining promotion to Division 2A and missing out on the Christy Ring Cup final by the narrowest of margins.

Well done to the team and management on their promotion.

Shane Boland turned in a stunning performance at Hastings Insurance MacHale Park this afternoon, scoring 12 points to help Mayo reach the final of the Christy Ring Cup at the expense of Derry with a 2-23 to 2-18 victory, writes John Melvin.

They will now meet Kildare in the final next week, and it is no more than Mayo deserve – although for a brief moment it looked as if Derry just might snatch a draw which would see them reach the final instead.

Just a point separated the sides as injury time approached but Mayo held firm, none more so than Boland and Joe Mooney whose late points in injury time sealed the deal.

Mayo were good value for their four-point interval lead (1-12 to 1-8) having led at one stage by six, Mooney finding the net with an excellent goal on 15 minutes.

But Derry also struck for a goal of their own from John Mullan followed by a point from Gerald Bradley to make it a one point game but it was Mayo who finished the half the stronger, Eoin Delaney, Shane Boland (free) and Mooney nailing three on the bounce.

A Kenny Feeney goal 15 minutes into the second half seemed to have settled the argument as Mayo took a commanding 2-19 to 1-17 lead but three minutes from the end of normal time Odhran McKeever struck for a Derry goal, and when Mullan followed with a point the margin was down to one – 2-19 to 2-18.

However, Mayo kept their nerve, a brilliant point from Mooney followed by a superb effort from Boland followed by a free from the same player putting the home side back in control – but it took two brilliant saves from goalkeeper Bobby Douglas to ensure their place in the final, in which they will face Kildare.