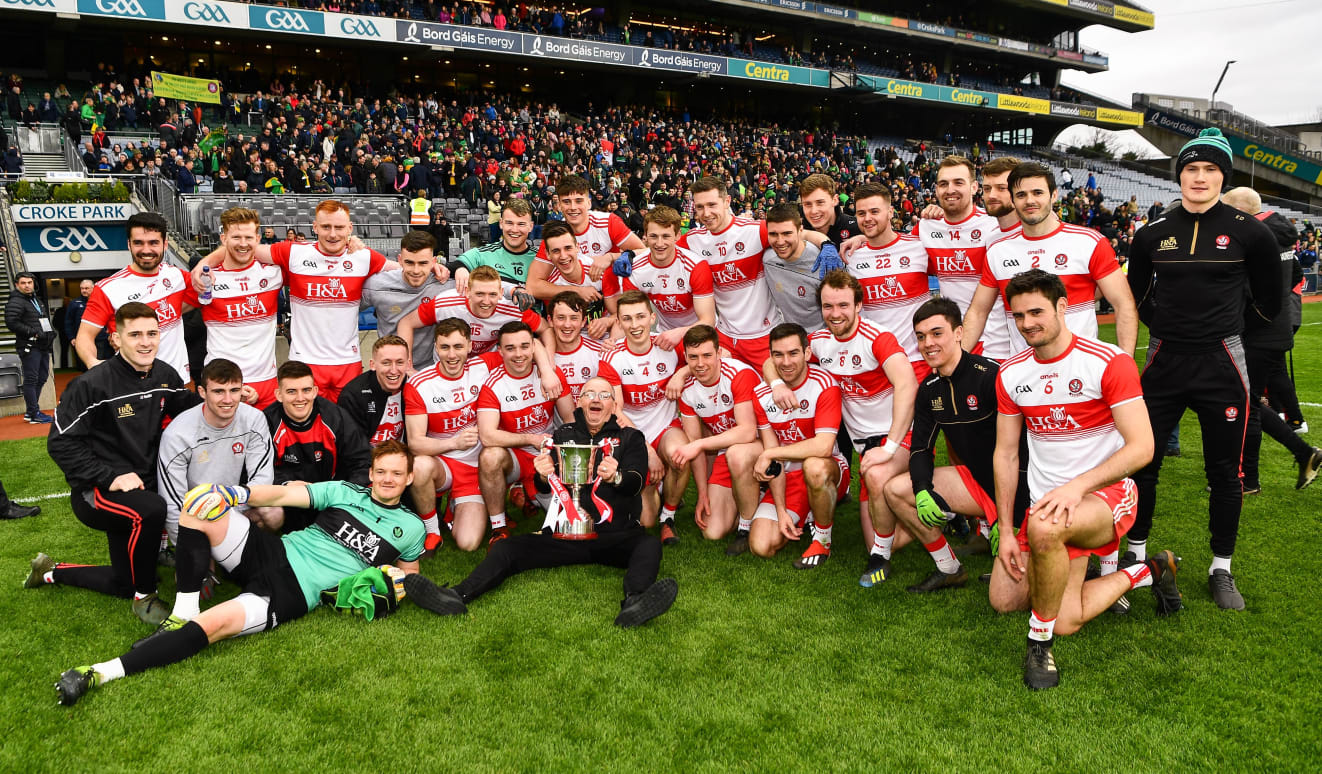 It’s a testament to their work ethic that the Connacht side were still competitive despite that disparity.

They also did themselves no favour with both their shot selection and execution, racking up a total of 13 wides, many of which were of the quite poor variety.

They might have lost the match, but there was honour in defeat for Leitrim. They battled all the way to the finish and their young team will learn an awful lot from this experience.

As for the match itself, it was open, entertaining game of football from the off.

Derry’s Chrissy McKaigue dropped deep as a sweeper whenever Derry lost the ball, but both games were set up more traditionally than we’ve become used to in recent years and were very much committed to attack.

Dean McGovern opened the scoring for Leitrim after just 40 seconds, but a minute later Derry had equalised through Enda Lynn.

That tit-for-tat pattern continued for the first ten minutes by which time the teams were tied at three points apiece.

There was more fluency to Leitrim’s approach play, and as the half progressed they started to gain the upper hand.

Mark Plunkett and Shane Moran were driving them forward from midfield, and the movement of their forwards was pulling the Derry defence out of shape.

When Ryan O’Rourke flighted over a brilliant point from the right hand side from a very tight angle they were 0-6 to 0-3 ahead and in no way flattered by that advantage.

In fact, they would have been further ahead but for some poor shooting.

They hit five wides in the first 17 minutes alone and would rack up another four before half-time.

That profligacy undid a lot of nice build-up play, but they were still three points ahead by the 23rd minute when wing-back Raymond Mulvey kicked a great individual score after charging downfield.

That would prove to be Leitrim’s last score of the half, though, and from there to the half-time whistle Derry took a strangle-hold on the contest.

Their defenders were now getting on top of the Leitrim forwards and forcing turnovers that were quickly turning defensive situations into attacking ones.

Their build-up play was less laboured now too, and their forwards started making hay when the ball was delivered in quickly.

All four of them scored in the final 15 minutes of the half as Derry hit six unanswered points to move 0-10 to 0-7 ahead by the break.

Leitrim stopped the rot at the start of the second-half with a point from Emlyn Mulligan, and moments later were thankful to goalkeeper Cathal McCrann for pulling off an excellent save from an Emmet Bradley shot.

But as the half progressed it became clear that Derry had an extra gear that Leitrim just didn’t possess.

The Ulster team’s greater size and physicality became more and more apparent as they turned over the ball time and again and then punished a tiring Leitrim defence.

Shane McGuigan, in particular, was starting to really make his presence felt as two points from him in the space of a minute pushed Derry five points clear.

Chrissy McKaigue, too, was starting to really dictate proceedings in the centre of an increasingly dominant Derry defence.

He wasn’t just the rock that Leitrim attacks increasingly foundered on, he was also putting Derry on the front-foot with his well-timed charges into Leitrim territory.

His second point of the day, a booming effort from 47 yards out put the Ulster side 0-17 to 0-11 ahead, and even though there were still 17 minutes plus injury time left to play a Leitrim comeback already looked unlikely.

To their credit, they never stopped trying, and a quick-fire brace of points from Evan Sweeney and Micheal McWeeney briefly gave their vocal supporters something to shout about again.

Derry weren’t about to crumble. A Christopher Bradley free settled any jangling nerves and then another fine point from Shane McGuigan gave them a comfortable buffer on the scoreboard again.

Leitrim launched themselves forward in the dying minutes as they came in search for the goal that might have pulled the match out of the fire, but they couldn’t find it.